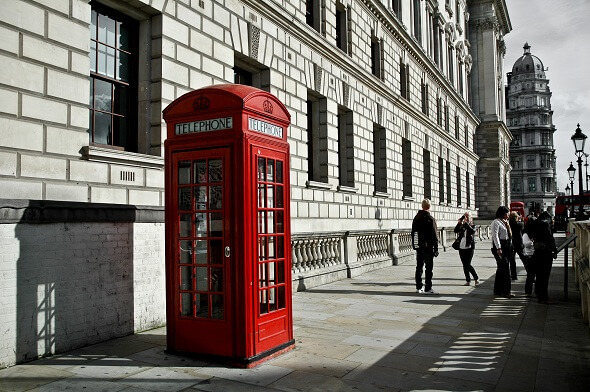 The most photographed phone booth in London sits in front of Big Ben.

Britain is just not yet ready to bid farewell to its beloved crimson telephone booths, it seems. Whether it is opening a small library, or opening elongated aquariums or even the world’s smallest pub, the UK has largely fallen into the habit of saving its darling icon by means of creative repurposing. The rescue efforts in some ways resemble the sublime mission of ‘saving the giant panda in China’ or ‘the polar bear in the Arctic’. Once again, someone in Britain to the rescue, but with a slight twist that echoes ‘useful, green and sustainable’. A majority of the UK’s ‘boxes’ (that’s what they call them in Britain!) have to a great extent become obsolete, fallen into neglect albeit some are constantly resuscitated as libraries or being fitted with medical equipment.

Two entrepreneurs are changing decommissioned Britain’s remaining 48,000 boxes into charging stations for mobile devices. The boxes are subjected to a sleek makeover – painted green and fitted with an 86cm rooftop solar panel. The insides are equipped with a variety of charging stations for distinctive models of cellphones, tablets. The service is absolutely free to use, although users will be shown adverts of Rihanna’s upcoming concert in the O2 or the Sun’s exclusive scoop on Prince Harry’s love affair the coming Sunday as they wait for their devices to charge. No complaints there at least these adverts won’t chase people when they leave.

The first green booth ‘Solarbox’ was unveiled on Tottenham Court Road in London this week, and five more are set to be operating in the city by April 2015.

“I lived next to a phone box in my second year at university, and walked past it every day,” Craston stated to the BBC. “I thought, ‘There are 8,000 of these lying unused in London, and we must be able to find a use for them.’ ” 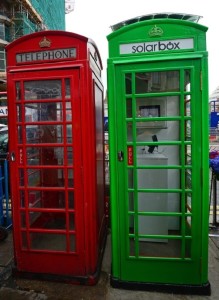 The Solarbox can charge up to 100 telephones a day, offering a 20% battery boost in 10 minutes. Since its launch, around six people for every hour utilize the booth, as indicated by the Craston.

Running out of battery is a constant struggle faced by smartphone users, as devices become more and more powerful without any equivalent and significant innovation when it comes to battery life.

“On launch day, my phone ran out of battery and I genuinely had to use the box,” said Craston.

The mayor cherished the idea. “In our modern world, where hardly any Londoner is complete without a raft of personal gizmos in hand, it’s about time our iconic boxes were updated for the 21st century, to be useful, more sustainable,” Boris Johnson said in a statement.

The charging stations guarantee a bit of ease for those “charging anxiety” attacks, the stressed, panicky feeling that smartphone users encounter when their smartphones run out of power with no charger nearby, according to a market research conducted by Mophie, a maker of smartphone cases. But in a city where the weather is overcast on any day you point on at the calendar, won’t the solar panels be useless? No! The entrepreneurs seem to have a solution for that as well, the Solarboxes have storage batteries that keep them working day or night, even in the London rain.

Funded by advertising, the founders of Solarbox are enthused about making sure that the users are engaged by “short, fun and exciting ads showing exclusive content”. Financed by promoting, the originators are quick to verify clients are locked in by “short, fun and energizing promotions demonstrating selective substance”. Firms that have signed the advertising agreement include Tinder and Uber, while 30 percent of advertising space will be reserved for community projects. The Solarboses will be locked during the night in an attempt to avoid vandalism. The boxes will be subjected to regular maintenance. It hasn’t been confirmed yet on whether there is a time limit on how long a user can use the box for charging his/her device.

While many are sad to the revered icon turning green, it is a valuable lesson that resuscitation of such historic icons is required in order for them to be a part of the future.

Anna Domanska
Anna Domanska is an Industry Leaders Magazine author possessing wide-range of knowledge for Business News. She is an avid reader and writer of Business and CEO Magazines and a rigorous follower of Business Leaders.
« Marriott Fined $600000 for Deliberately Blocking Its Customers’ Wi-Fi
The Proverbial Glass Ceiling that Limits Stilettos in the Male Dominated Oil and Gas Industry »
Leave a Comment
Close