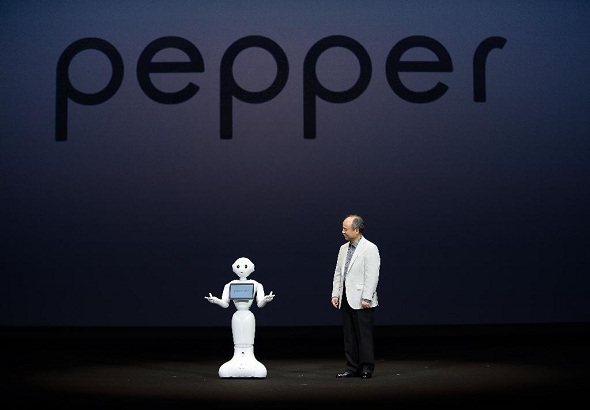 The new humanoid robot will be called the Softbank Pepper. Softbank Corp said that Pepper will go on sale in Japan in February for 198,000 yen (US$1,900).

The 120cm (48 inch) tall, 28 kilogram (62 pound) humanoid robot has two big doll-like eyes and a flat-panel display stuck on its chest. Pepper will use cloud-based artificial intelligence to develop its own emotional capabilities along with safety features to avoid crashes and falls. It can read into the tone of its owner’s voice and pick up on a host of emotional moments.

Other than featuring the latest voice recognition, Pepper is equipped with mics and more than a dozen sensors, it features two touch sensors in its hands, three touch sensors on its head, and six laser sensors and three bumper sensors in its base. The four microphones on the head allow the robot to identify the direction of sound. It also uses infrared technology to maintain a proper distance between itself and the human. It also has two cameras and a Wi-Fi and Ethernet networking capabilities with over 12 continuous hours of battery life.

With the robot having mastered 4,500 Japanese words already, Softbank intends to make Pepper even more competent as time goes by. Over time, robot applications can be installed on the robot to upgrade its functionality and intelligence.

The potential is great for the robots as these intelligent machines are pitched as a solution to labour shortages and rising wage costs, along with a rapidly ageing population that requires care. According to chief executive Masayoshi Son, Softbank will be using prototypes to serve customers in its mobile phone stores. Starting Friday, the machine will be on display at Softbank retailers, the company said.

Softbank, which now owns Sprint mobile carrier of the U.S. and has more than 100 million subscribers all over the world, has been expanding rapidly as a mobile carrier in Japan, known to being the first to offer Apple’s iPhone.

It will be interesting to see if this pioneering technology will take off. A fully functional robot living among humans with its ability to balance itself might just be the beginning, but already a propitious fact.

Anna Domanska
Anna Domanska is an Industry Leaders Magazine author possessing wide-range of knowledge for Business News. She is an avid reader and writer of Business and CEO Magazines and a rigorous follower of Business Leaders.
« Sprint and T-Mobile have reportedly agreed to a $32 billion merger
Intel To Bring Wireless Computer Through Skylake Platform »
Leave a Comment
Close

Amazon-backed EV maker Rivian has filed for its initial public offering. We find out if the Rivian IPO is worth the price or simply the next internet bubble.
22 hours ago