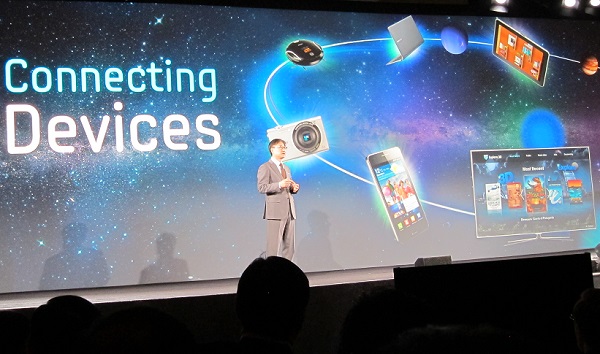 During the International Consumer Electronics Show (CES) in Las Vegas, Boon-keun Yoon, Samsung Electronics co-CEO, disclosed an exciting enterprise pursued by the South Korean tech giant this year: Smart connected homes. Yes, believe it or not, the home sweet-smart home will finally become a reality in the near future.

The smart connected home has been expected for many years and it represents a market to be worth more than $60 billion by 2017. Up to now, digital smart home devices —like washing machines and refrigerators that connect to smartphones and internet—have been too sophisticated and complicated to use, according to Yoon. For instance, users are likely to log into independent apps in order to use their different smart items at home, which means that the overall house is not really smart connected or integrated. Furthermore, users frequently have to go through a lot of steps to use their item’s associated apps and that becomes time consuming and inefficient. To improve that end, Samsung is planning to roll out this year the Smart Home protocol (SHP), which is a software system that aims to smooth communications and simplify the use between its own appliances and mobile devices by providing the user a single point of control like, for instance, a tablet. The smart connected home is an attempt to unify the diverse digital smart devices and appliances in the house to one common user friendly system.

How the Smart Home protocol works

Samsung’s smart home application will have three main sections: Home View, Device Control, and Smart Customer Service. Device Control will allow the user to set up behaviors at specific times. For example, the user will be able to order his Galaxy Gear smartwatch—through voice command—that it should turn off the lights and the heater at certain time. The Smart Customer Service represents a way in which the digital smart home devices will be able to inform their owner when they need to be repaired or when they require more consumable supplies. Finally, the Home View feature will let the user peek in on his house when he is away, getting the images through the cameras built into the different digital smart home devices.

“Ultimately a smart home would mean a home where the devices are very easy to use, so an environment where the devices understand the consumers and their needs,” Yoon said. “If there’s a lot of depth to a device, it’s going to take a lot of time and investment to get used to them, but if we make the depth really shallow and easy for consumers to use then I think that pain point will be reduced dramatically.” The smart Home protocol is only used by Samsung devices for now, but Yoon disclosed that the company plans to offer it to other application developers and manufacturers with the goal of making all home devices interoperable in the near future.

The South Korean tech giant did not reveal the full list of compatible digital smart home devices that it will launch to the market during 2014; although the firm said it plans to cover home energy, healthcare products, and home security through different partnerships with other companies.  Yoon estimates that in the next two or three years the smart connected home will experience a great boom worldwide.

Apple iPhone 13 Pro and iPhone 13 Pro Max can be a hit with its ever new technology A15 Bionic chip and other cool profound features.
3 hours ago

The French oil major, Total, has signed a $27 billion deal to fund a 1-gigawatt solar power plant, and boost oil and gas production in the Middle-East region.
4 hours ago