Microsoft is finally getting all of its company’s services into one solid ecosystem. The company announced that an improved version of Skype is now available on Outlook all over the world. Outlook users will now be able to make audio and video calls directly from their inboxes.

Initially, this was a feature that was previewed to only a few markets last year including the U.S., U.K., France, Brazil, Germany and Canada but now it will be available to everyone and anyone with an Outlook.com account anywhere in the world. 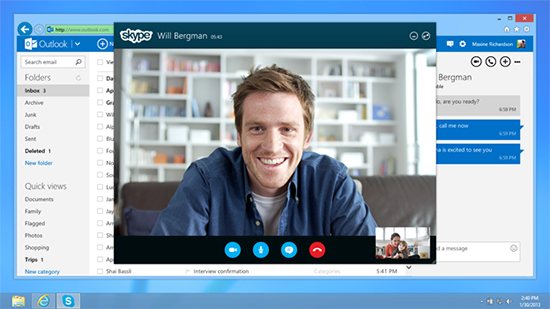 Microsoft has announced that an improved version of Skype is now available on Outlook all over the world. Outlook users will now be able to make audio and video calls directly from their inboxes.

Skype for Outlook.com enables users to connect with Skype friends seamlessly right from Outlook.com inbox, and can go from email or chat to a video call with just a click. Users can either move the cursor over their friend’s picture above his/her contact information within an e-mail or can initiate a conversation by just clicking the audio or video call buttons. The user can also record video messages for contacts to view when they log back in to a conversation.

To enable Skype to integrate with Outlook.com account, users first need to download and install a particular web browser plugin, which will allow the two services to connect. The plugin is available on Internet Explorer, Chrome, Firefox or Safari web browsers. Users with existing Skype accounts can just sign in and get connected. They can then send instant messages to friends or make voice or video calls along with sending e-mails. Users can also sync their contacts between their Outlook.com and Skype contacts list. In case a user doesn’t have a Skype account yet, he can use his Outlook email address to log in to Skype.

This latest version of the plugin also brings with it support to make and receive HD video calls for PC users, provided that both callers have HD compatible displays, web cams, and broadband internet. Microsoft has also fixed a glitch that plagued users in earlier versions of the service whereby Skype calls continued to ring even after being answered. Skype for Outlook.com is also available for Mac users with Safari. Lately the company has also consolidated its Office Online service with the rest of its online offerings, including Outlook.com, OneDrive, People, and Calendar.

Microsoft acquired Skype 3 years ago in May 2011, and has since withdrawn its own Messenger service to facilitate Skype. The company has used Skype in Xbox One console and also in many of its other systems that have a video or voice call features.

Mobile devices like Android, iOS, and Windows Phone also feature Skype. Skype for Windows 8.1 is also capable of Snapping, which allows users to make and receive video calls on their smartphones and snap the conversation to one side of the screen which enables them do other things while in the middle of Skype calls.