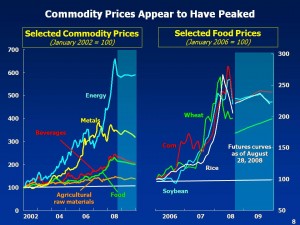 Global food prices have risen for the sixth month in succession. Easily surpassing the peaks seen during the 2008 food crisis which prompted civil disturbances from Mexico to Indonesia, the UN’s index of food prices – an international basket comprising wheat, corn, dairy produce, meat and sugar – for 2010 stands at its highest since the index started in 1990. Wheat has almost doubled since June, sugar is at a 30-year high, and pork is up by a quarter since the beginning of 2010.

And according to the UN, the most likely effects of food prices having reached this all-time high are of the worst kind: increasing hunger, global inflation, geopolitical tensions and food riots among the planet’s poorest people.

The trends have already affected the UK where the jump in food prices in November was the highest since 1976. Meat and poultry were up 1 per cent and fruit by 7.5 per cent in one month.

Food producers have been told to expect the wheat price to jump again this month, hitting bakers and the makers of everything from pasta to biscuits.

More is sure to follow and that in turn will add to pressure on the Bank of England to raise interest rates to control rising prices. Higher mortgage bills by the end of the year will add to the unpleasantness facing “middle England” from a year of tax hikes and below-inflation pay rises.

However, the biggest impact of the food price shock will be felt in countries in the developing world where staple items command a much larger share of household incomes.

Economists warn that “soft commodity” food prices show little sign of stabilising, and that cereals and sugar in particular may surge even higher in coming months. In addition, long-term trends associated with growth in population and climate change may mean higher food costs become a permanent feature of economic life, even though the current spike may end in due course. Speculation, too, may be part of the crisis, as investors climb on to the rising food-price bandwagon.

Mr Abbassian said the UN agency is concerned by the unpredictability of weather activity, which many experts link to climate change. He said: “There is still room for prices to go up much higher, if for example the dry conditions in Argentina tend to become a drought, and if we start having problems with winterkill in the northern hemisphere for the wheat crops.”

One concern, especially in Ukraine and Russia, is that the cold winter, following disastrous droughts and summer fires, will have damaged the seeds for next year’s crops, leading to an even more acute crisis than seen last year. Government policies, especially the export bans imposed by nervous Indian and Russian governments, have exacerbated such problems in world markets.

Meanwhile, burgeoning consumption in the booming economies of East Asia and the pressure exerted by the demand for crops for biofuels rather than food, especially in the US, is adding to the unprecedented squeeze on world food supplies.

The latest surge in crude oil prices adds to the risk of turmoil. Many experts say oil prices show few signs of abating, and the price of a barrel is set to breach the $100 barrier again soon. Opec officials yesterday said they were happy with such a level. Oil peaked at just under $150 a barrel in 2008; any sign of renewed tension in Iran would see the price exceed that. Higher oil prices add to food price inflation by increasing transportation costs.

The interplay of rising fuel prices, the growing use of biofuels, bad weather and soaring futures markets drove up the price of food dramatically in 2008, prompting violent protests in Mexico, Indonesia, Egypt, Cameroon and Haiti. Last year’s spike was provoked mainly by the freakish weather conditions in Russia and Ukraine, but one of the underlying trends is the growing and changing appetites of East Asia.

As more Chinese enter the middle classes they tend to consume more poultry and meat, just as Westerners did at a similar stage in their economic progress. However, meat and poultry husbandry consumes at least three times the resources that grains do, while the drift towards the cities in China is reducing the yields of its farms. Similar trends are visible in the other fast-growing, populous nations such as Brazil, India and Indonesia.

Countries that are poor and produce relatively little of their own food are most vulnerable to the food price shock – Bangladesh, Morocco and Nigeria top the “at risk” list, according to research by Nomura economists, who also identify growing shortages of water as a critical factor restraining any growth in agricultural productivity.

Owen Job, strategist at Nomura, said: “The economists’ model of increasing supply as demand grows may be breaking down. Supply cannot keep up with factors such as biofuels and the urbanisation of China. Some 30 per cent of all water used in agriculture comes from unsustainable sources.”

Christy Gren
Christy Gren is an Industry Specialist Reporter at Industry Leaders Magazine she enjoys writing about Unicorns, Silicon Valley, Startups, Business Leaders and Innovators. Her articles provide an insight about the Power Players in the field of Technology, Auto, Manufacturing, and F&B.
« Making a bang in the Middle-East! Bechtel radiates its Nuclear expertise
Serious competition for the ipad? The new Motorola Xoom… »
Leave a Comment
Close