An Aloft Hotel in Cupertino, Calif., confirmed an exceptional hire: SaviOne – a robotic butler! A.L.O. as the robot is known as, reported to his first day at work on Aug 20. The robotic butler is 3 feet tall, weighs roughly 45 kilograms. The robot has been given a sleek love, with a very simply and friendly user interface – touch screen that doubles as the robot’s face, and travels at a human walking pace. Created by robotic company Savioke, A.L.O the SaviOne ‘butler’ can travel independently between floors via elevator. According to the Starwood press release, A.L.O. has double majored in simple errands and friendliness at Savioke:

“When Aloft’s A.L.O. arrives at the appropriate guest room, it phones the guest to announce its arrival, delivers the goods and makes its way back to the front desk.  A.L.O. will know when a guest opens the door via an onboard camera. Once the door opens, A.L.O. will unlock, open its lid and provide instructions through onscreen prompts for guests to remove the item and close the lid. We believe the staff has more important things to do than deliver a toothbrush or a package of chips to a room, and that they would prefer to spend their time creating a more personalized experience for guests.” 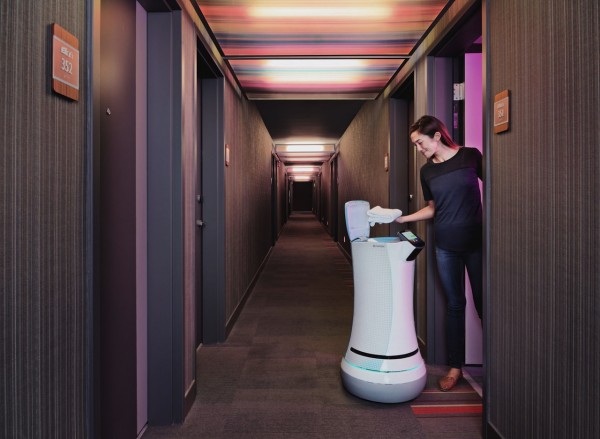 A.L.O doesn’t acknowledge money as tips, rather, it requests tweets.

A.L.O doesn’t acknowledge money as tips, rather, it requests tweets. It likewise has a screen that asks the visitor to give for it a rating for its service. On the off chance that it gets a high rating, it will break into a small cheerful dance. “We thought the idea was brilliant, a little bit of child wonderment, somewhere between Rosie from the Jetsons, R2-D2, and Wall-E,” says Brian Mcguinness, worldwide brand leader of specialty select brands for Starwood Hotels and Resorts Worldwide, parent company of Aloft. 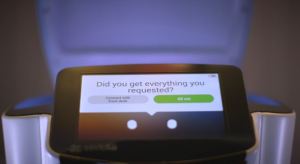 On the off chance that it gets a high rating, it will break into a small cheerful dance.

Starwood Hotels wanted to target the next generation traveler, especially those born in the 1980s and early 2000s, who can be in simple words described as more technology savvy. The hotel has also tested more hi-tech devices including smartphone check-in, keyless enter and in-room Apple TVs. “In our early testing, all of us at Savioke have seen the look of delight on those guests who receive a room delivery from a robot,” says Steve Cousins, CEO of Savioke. “We’ve also seen the front desk get busy at times, and expect Botlr will be especially helpful at those times, freeing up human talent to interact with guests on a personal level.” Speaking of robots taking over human jobs, “The Botlr is certainly not going to replace the personality or hospitality in our talent,” says Mcguinness. It all goes well, he hopes to hire more Botlrs to join the marvelous team.