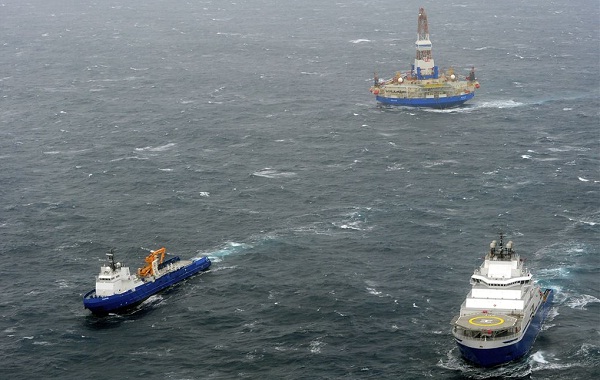 Shell is gearing up to tow its drilling rig

Royal Dutch Shell PLC is set to tow its grounded drilling rig in Alaska as soon as weather conditions are good enough to perform the operation. The Kulluk, the Shells’s drilling rig, will be moved to a save harbor, according to detailed plans of the company.

On the 5th of January, Sean Churchfield, incident commander at Royal Dutch Shell PLC, informed that experts and naval architects declared that the Kulluk, which ran aground after separating from a tow vessel on the 31st of December, was ready to be towed.  The Kulluk is to be moved to Kiliuda Bay where test are scheduled to be conducted, according to Sean Churchfield’s words. However the planned attempt will mainly depend on three factors, namely, weather, tides and readiness. Sean Churchfield underlined: “We will be looking to move the vessel as soon as we are ready and able.”

The drilling rig is currently grounded near Sitkalidak Island, almost 100 kilometers southwest of Kodiak, Alaska. As it was firmly highlighted in the statement, the Shell drilling rig remained upright with the fuel tanks untouched. Royal Dutch Shell PLC has ensured that salvage teams pay much attention to safety issues as safety remains the number one priority.

The planned operation will be performed by the same ship which lost the Kulluk while transporting it to Seattle.

The earlier attempt to control the drilling rig was tattered by engine failure experienced by the four engines. A preliminary probe indicated that the bad fuel was responsible for the failure, yet the results are not conclusive, according to the statement.

As it was underlined in the statement, fuel tanks remained untouched on the Kulluk. Royal Dutch Shell PLC does not plan to remove approximately 150,000 gallons of diesel from the grounded shipping rig as it might dangerous also for the environment.

Investigation to be conducted

Royal Dutch Shell PLC and its contractors were a given permit to remove the Kulluk from the grounding site. Along with the aforementioned permit from the Alaska Department of Natural Resources, the company also obtained another which allows the Kulluk and two tugs to remain in Kiliuda Bay or Port Hobron till the 14th of January. Both licenses require Royal Dutch Shell PLC to prevent and clean up pollution which might be caused by the accident. The company is also required not to interfere with other users of Arctic waters.

Without a doubt,  the accident is the latest failure in the company’s efforts to get to Arctic oil. The accident also gave ammunition to environments groups which demanded on the 3rd of January the suspension of current and pending Arctic drilling licenses until companies prove they can operate safely in the region.

The accident and the grounding of Shell drilling rig raised many questions. Members of Congress are deeply touched and surprised by the current events and therefore they request for an investigation of the drilling ship owned by Royal Dutch Shell PLC. According to a statement released by a U.S. House coalition, the group has requested the Interior Department and the Coast Guard to probe the accident.

Anna Domanska
Anna Domanska is an Industry Leaders Magazine author possessing wide-range of knowledge for Business News. She is an avid reader and writer of Business and CEO Magazines and a rigorous follower of Business Leaders.
« Drop in UK services sector raises fears of triple-dip recession
HTC sees its 4Q profit drop 90% »
Leave a Comment
Close