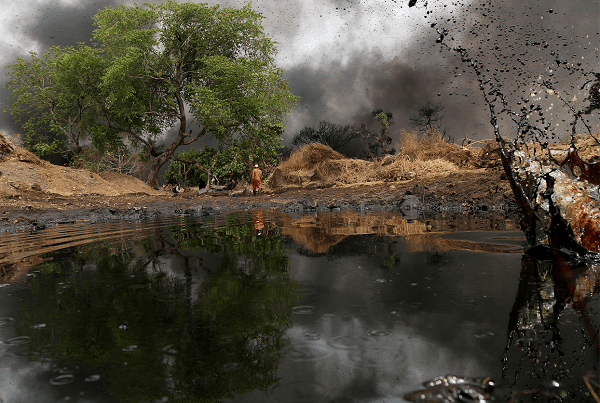 Four Nigerian farmers decided to sue Royal Dutch Shell before a Dutch court over Nigeria spill case. Shell is accused of three oil spills in the Niger Delta which led to loss of livelihoods of fishermen and farmers from the area. The case could set a precedent for damage claims against international companies and their global environment responsibility.

The Nigeria spill case was filed in a court in the Hague, where Royal Dutch Shell has its joint headquarters. The claims of the Nigeria spill case relate to three oil spills between 2004 and 2007. The case was brought by four Nigerian farmers and fishermen. The civil suit was backed by the environmental lobby group Friends of the Earth.

The Nigeria spill suit alleges that oil spills caused by Royal Dutch Shell and other oil companies made fishing and farming in the plaintiffs’ Niger Delta villages impossible. Nigerians, who filed the case, are seeking undisclosed compensation as they cannot feed their families because the area had been polluted with oil. In addition, they argue that oil spills caused by Royal Dutch Shell were not dealt with in a proper way. As a result of oil spills they have lost their means of a livelihood.

Eric Dooh, who comes from Goi community located between tow pipelines, noted: “My community is a ghost land as a result of the devastation. We had good vegetation. Today people have respiratory problems and are getting sick. Shell is aware of the whole devastation. I want them to pay compensation, to clean up the pollution so we can grow our crops and fish again.”

Royal Dutch Shell, however, rejects all the claims, stating the main cause of Nigeria oil spills in the area are thefts. Moreover, the company’s officials highlight the fact that whenever the oil spilled occurred because of illegal oil theft Shell took steps to clean the pollution.

Allard Castelein, vice president for environment of Royal Dutch Shell, has noted that the biggest pollution problem in the area was caused by thieves stealing from the company’s facilities.

Shell Petroleum Development Co. is the biggest oil and gas company in Nigeria. According to data, its production capacity amounts for over 1 million barrels of oil equivalent a day. The company operates a joint venture in which Nigerian National Petroleum Corp., a state-owned company, has a majority share. Shell discovered and started Nigeria’s oil well in the late 50s.

Even though Shell has recently engaged in building clinics, roads and even natural gas power plants for the Niger Delta region, not only environmental groups blame Shell’s operations in the country for the pollution. In 2011 the United Nation released a report stating that the government and international oil companies, in particular Shell, were responsible for polluting the Ogoniland region, which is part of the Niger Delta.

The company, in addition, has been facing a legal action in the United States, where the U.S. Supreme Court is hearing a case filed by Nigerian refugees accusing Shell of supporting the Nigerian military in torturing and killing ecologists in the 90s.

Most meat in 2040 will not come from animals, says report. However, the recent decline in sales of plant-based meat fell by 1.8 percent compared to the year before, taking declines
34 seconds ago