Shares of Asia slump on concerns over US fiscal cliff


TAGS:
crisis in the USrate of the dollarShares of Asia 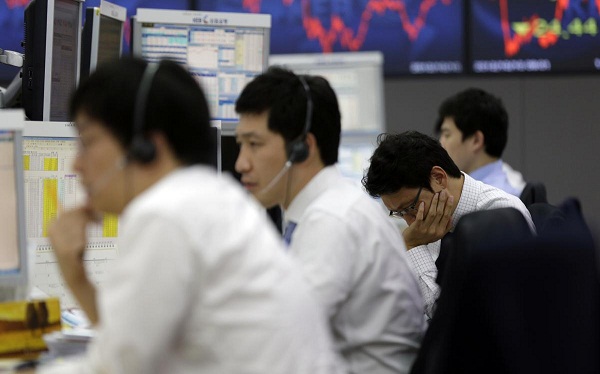 Shares of Asia extended losses on the 8th of November as investors are highly concerned  about the crisis in the US regarding the budget thereby underpinning the rate of the dollar, which has been regarded as a safe heaven, and also yen as safety bids on the US treasuries.

US stock futures grew by roughly 0.4 percent thereby pointing towards a recovery at the opening of Wall Street after nearly all the stock indexes of the US dropped by approximately 2 percent overnight. Shares of Europe also rebounded from the terrible losses suffered in the last day with expectations of opening higher by as much as 0.6 percent. The broadcast index from MSCI of shares of Asia Pacific outside of Japan fell by nearly 1.2 percent on the 7th of November thereby retreating from a high of nearly eight months and was looking all set for the highest drop of percentage in a day in almost seven weeks. While shares of South Korea and Hong Kong led the falls, shares of Australia also saw a dive of nearly 0.7 percent. The Nikkei average of Japan dropped by nearly 1.7 percent displaying a low in as many as three weeks. Shares of Asia have therefore seen a fall in almost all its nations.

The politicians are facing the crisis in the US of approximately $600 billion by early part of the year 2013 until they are able to find a way to compromise the deficit. The debt ceiling matter also has to be taken up in order to avoid the possibility of a shutdown of the government. Washington needs to arrive to a deal by the end of the year to avoid recession thereby taking the global economy to a slump with it. The rate of the dollar was up by 0.1 percent on the 7th of November thereby benefiting from the safe heaven appeal of the US currency. But the rate of the dollar fell almost 0.2 percent against the yen, considered to be another safe heaven currency, as it hit a low of as much as 101.72 against the euro, its lowest in a month’s time. According to Jeremy Friesen, a commodity strategist at Societe Generale in Hong Kong, the global risk has moved to the crisis in the US that has made the whole situation a bit messy. He expects the rate of the dollar to decline only if the Fed balances any slowdown.

The gloom in Europe:

Along with the fall in shares of Asia and the crisis in the US the reigning gloom in the economy of Europe has made the situation even worse. The pressure continued on euro at $1.2747 in spite of good news from Greece, which is down under with debts, where the parliament has recently approved of a stern package that is required heavily in order to avoid bankruptcy and unlock very vital worldwide aid. There is still a gloomy outlook reigning over Europe as the European Commission declared that there was very little chance of the economy of the eurozone to make a significant growth.