Serious competition for the ipad? The new Motorola Xoom… 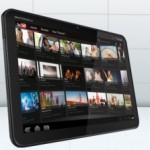 Motorola Xoom Tablet to be unveiled at the CES 2011

Is this the tablet everyone’s been waiting for ? The new Motorola Xoom, to be unveiled at the Consumer Electronics Show (CES) – the largest consumer technology tradeshow in the world – in Las Vegas, is hot news. Motorola Mobility Inc.’s CEO Sanjay Jha showed off the Xoom at a news conference on Wednesday in advance of the CES.

Raved about on stage by lead Android man Andy Rubin at the Dive Mobile event in December, Motorola’s hotly-anticipated DROID Xoom is expected to run Honeycomb Android 3.0, the biggest update to the OS yet.

While current versions of Android are meant more for the smaller touch screens on smart phones, the Honeycomb version of Android has been designed for the larger touch screens on tablets. Motorola Mobility Inc. CEO Sanjay Jha said Honeycomb will include a redesigned version of YouTube and the ability to make video calls through Google Talk. “The user interface, the whole interactive model is designed for the tablet,” he said.

The latest addition to Verizon’s DROID family which already includes Motorola’s current DROID Pro, DROID X, and DROID2, the one disappointing bit is that the Xoom won’t be able to access Verizon’s new 4G LTE network, atleast not initially. However, it WILL support Flash video content – something Apple Inc.’s iPad does not do. Also, it can work as a Wi-Fi hotspot to connect up to five more gadgets to the Internet.

Like the Blackberry, the Xoom runs on a dual core processor, spelling more good news with the promise of longer time between battery charges. While the Blackberry runs on an ARM processor the Motorola Xoom has Nvidia’s fire-breathing Tegra 2 dual-core processor ; fantastic news, since Nvidia’s Tegra is more powerful and uses less energy.

Other specifications of the tablet include :

The Xoom will be available in the market from the first quarter onwards, and will initially work with upgradeable Verizon’s 3G network so it can work on its new 4G network in the second quarter. Verizon began deploying its new network last year. It uses LTE, or Long-Term Evolution, technology, which is a standard technology behind the next-generation cellular networks, known as 4G. It is designed from the ground up to carry data. Network operators expect not just higher speeds but lower operational costs with LTE.