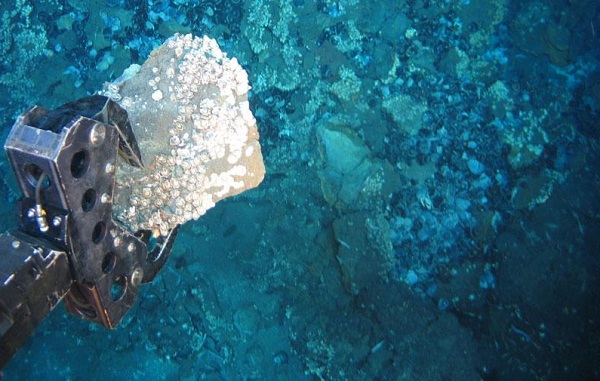 Deep sea-mining – the mining of the future

“The extraction of oil, coal and minerals brought,

and still brings, a cost to the environment.”

To progress, humankind has had to use oil, coal and minerals. And frankly speaking, extraction of them has been costly to the  environment and to the human health, paraphrasing Bono. Indeed, after long years of mining, we can see the changes driven by the exploitation. But we are also about to see mineral ores disappear off the face of the earth – at least the dry one…. Before the  disappearance, we will be forced to extract them from less-concentrated deposits which in turn will lead to increases in expenses and prices as well.

The lack of minerals or the trammeled exploitation might lead even to very serious problems for the civilization. The truth is that we need minerals to survive. Therefore many analysts and researchers are looking for new sources of minerals. And to cut a long story short, all ideas of extraction of minerals from sea and seawater are innovative. But the most important thing is to find ways of the extraction that will not be harmful for the environment as we have only one planet to live on…

And even if some of those ideas look too futuristic, don’t be mistaken as they will not be used in a very distant future!

Arthur C. Clarke once interestingly noted: “How inappropriate to call this planet Earth when it is quite clearly Ocean.” Without a doubt, there is a grain of truth in that statement. While we more or less know the lands and what they hide, we still have small knowledge of the oceans. However, we have been recently learning more about them. In fact, the oceans hide immense amounts of  much-needed minerals. And if you think that all of those minerals need to be recovered with the need of digging, crushing,  processing and using other difficult methods, you are mistaken.

For centuries, oceans have provided humankind with the unknown and magical realm. Now, they seem to be mineral realms as well. Even though we know that certain minerals are hidden in the depths of water, there are certainly many of them we have not found yet.

According to studies, the oceans contain staggering fifty quadrillion tons of dissolved material. Simply, this is a huge amount compared to the total mass of minerals extracted these days all over the world. However, there is a problem as the majority of dissolved material is in the form of a few ions. And what is more, that those are not so important for the contemporary industry.

Interestingly, the findings of several research show that the most common metal ions, which are at the same time might be quite easily extracted, are Na+, Mg2+, Ca2+ and K+. Therefore it is not surprising  at all that more and more companies are deeply interested in extraction of aforementioned metal ions from seawater.

Damian Palin, a young researcher, claims that we (people) will see development of the mining of the future. And all because of the research on pulling clean water from the oceans, who would have thought about it? The salty brine, which is simply a leftover after the process of pulling water from the oceans, can be used. The young scientist has noted some collaborative metal-munching bacteria might be quite useful when it comes to the the whole process of extraction.

The researcher, who can be considered crazy by some, has been working on finding a way to use bacteria to biologically “extract” minerals from seawater. His work is focused on finding and understanding the features of microbes so that they can be used to exploit chosen minerals out of seawater desalination brine. Damian Palin has underlined that this method could be the mining of the future as it would not be harmful for the environment and people in general. Even though the work on it is still in the initial phase of development, the idea of ecological mining is luring.

With mineral and metal sources being harder to find, more companies are deeply interested in deep sea-mining. Yes deep, as companies have been mining shallower waters for years as it has been simply an easier way of getting what they want, including  diamonds.

But today there is a growing  need for search for sources in deep sea. This demand is strongly felt and new small and specialized companies are springing up like a mushroom just to take the advantage of the new-born industry. This is possible as essential technology, including contrivances and computer mapping,  is advanced enough to start the extraction.

What is more, companies cannot wait for counting their earning as deep seawater is expected to contain relatively rich sources of different metal and minerals, including ore and gold. Deep sea mining is also easier not only because of technology, but also because of the climate change which has already made some inaccessible regions attainable…

Therefore there are more reasons to start digging as the industry claims. But – there is always but… Deep sea-mining seems to be a threat to the environment despite the fact that mining companies do deny that their operations can pose a threat to the health and surroundings. Steve Rogers, chief executive officer of Nautilus, stated that he was not much disturbed by the potential impact of deep sea-mining, underlining: “This will be a relatively small footprint compared to a mine on land, on an area about the size of a dozen football pitches…This isn’t in a fishing area and won’t impact coral. Even if it were in a fishing area, it won’t affect that upper area where the fish are.”

Scientists are, however, doubtful as their studies show that any incident can have an enormous impact on the deep-sea ecosystems. On the other hand, they are aware that the deep sea-mining can be quite beneficial for science as the beginning of the industrialization will have to be preceded by detailed research on many aspects including effects on ecosystems.

And indeed, scientists and miners will have to learn many new things about deep seas if the deep sea-mining project is to be put into realization.

Mining of the future

The fact is that the initiative of the extraction of minerals from the seawater is not new as you can think. It has reemerged throughout history especially during groundbreaking energy crises and other world-shaking events. For example, the first oil crisis of the 1970s led to the popularity and dissemination of the idea.

These days, the idea of the extraction of minerals from the seawater has already reemerged in the public debate due to adverse economic conditions and the energy crisis. And simply deep sea-mining is attractive and luring for investors. Experts are convinced that the shortage of many minerals, including uranium, could be solved, namely, by the extraction of them from seawater.

Yet, there has to be much done if deep sea-mining is to be put into effect, taking into account that extraction of minerals from seawater is simply a complex task. Even though there are huge resources of minerals in seas, still methods of extraction need to be developed. Of course, Damian Palin is working on one, but other researchers need to work on different ones so that the cheapest and the most effective method can be used.

And while deep sea-mining might start in the near future, there is a deep need of less invasive methods that will not pose a threat to the environment.

Anna Domanska
Anna Domanska is an Industry Leaders Magazine author possessing wide-range of knowledge for Business News. She is an avid reader and writer of Business and CEO Magazines and a rigorous follower of Business Leaders.
« IBM on edge of selling server business due to poor Q1 performance
China’s manufacturing PMI embitters »
Leave a Comment
Close