Scientists find An Entire Planet Made of Diamonds! 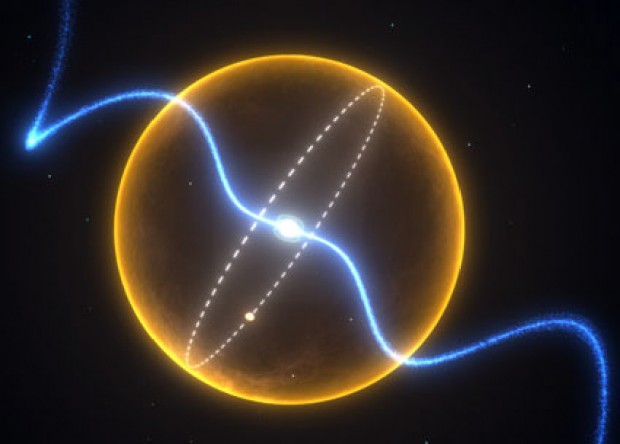 Scientists find An Entire Planet Made of Diamonds!

If a diamond is a girl’s best friend, this planet promises a heaven like no other, for every woman out there.

A team of researchers from Australia, Germany, Italy, the UK and the USA, have discovered in the Milky Way what they believe to be an entire planet made of diamond.

Led by Professor Matthew Bailes from the Swinburne University of Technology in Australia, the team of scientists who have discovered “diamond planet” believe that the now much smaller planet is part of a once-massive star that’s now been transformed.

The planet was first detected by the CSIRO Parkes radio telescope as being an unusual star called a pulsar. This discovery was followed up with the Lovell radio telescope in the UK and one of the Keck telescopes in Hawaii.

The newly discovered pulsar, referred to as PSR J1719-1438, is accompanied by a small companion planet orbiting the pulsar in a binary system; a deduction that the scientists arrived at given the systematically modulated pulses that the pulsar was sending out which were attributed to the gravitational pull of the small companion planet. This is the newly discovered “diamond planet”

According to reports published by the Swinburne University and The University of Manchester, the pulsar and its planet are part of the Milky Way’s plane of stars and lie 4,000 light-years away in the constellation of Serpens (the Snake).

According to the scientists’ calculations, the companion planet to the pulsar is estimated to have slightly more mass than Jupiter, and a diameter of less than 60,000 km – about five times the diameter of Earth – and is about an eighth of the way towards the Galactic Centre from the Earth.

Despite the planet’s small size, the newly discovered planet is estimated to have slightly more mass than Jupiter. And it is this high density that provides a clue to the planet’s origin, according to Professor Bailes.

Given that the pulsar J1719-1438 and its companion planet are so close together, the team of scientists is assuming that the companion can only be a very stripped-down white dwarf, one that has lost its outer layers and over 99.9 per cent of its original mass.

According to Dr Michael Keith from CSIRO, one of the research team members, “this remnant is likely to be largely carbon and oxygen, because a star made of lighter elements like hydrogen and helium would be too big to fit the measured orbiting times.”

The density means that this material is certain to be crystalline: that is, a large part of the star may be similar to a diamond.

In addition to being an Astrophysics and Supercomputing academic expert, Professor Bailes is also the founder of the organisation that was responsible for development of the Virtual Room, an octagonal virtual reality system on display at Melbourne museum, and is currently working on Directing his first film, “Realising Einstein’s Universe”.