The meeting was a commitment from the Millennial Prince to bring hyperloop transport system to Saudi Arabia; to create a transit route that will exponentially reduce travel time between the major hub of Jeddah and the capital Riyadh.

Crown Prince Mohammed Bin Salman travelled with some other Saudi Arabia’s defence ministry members for the meeting which held at California’s Mojave Air and Space Port for prospective partnership with Branson’s Virgin Galactic, which is currently developing a commercial transportation system for space travel.

As the only company in the world to has developed a fully functioning hyperloop technology, Virgin Hyperloop One (VHO) is warming up to establish more practicality with the world’s most transformative technology in Saudi Arabia where trade and innovation is making history the most, said VHO senior executives in Mojave desert during the meeting at the Virgin Galactic test site where Saudi Arabia’s Crown Prince and his allies were hosted. 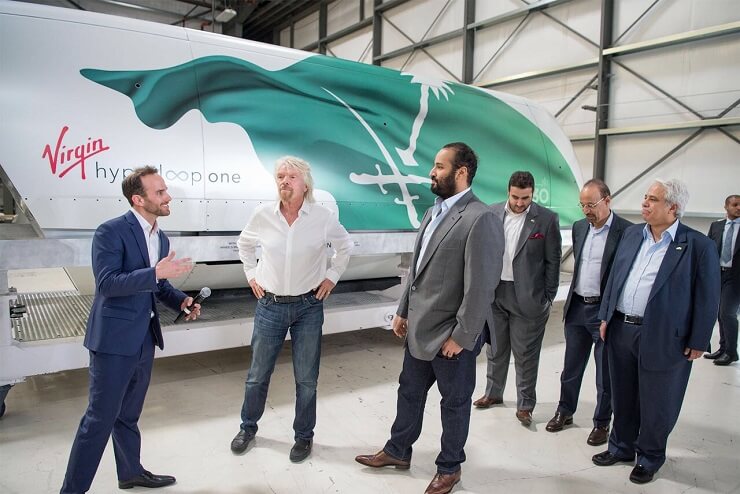 Executives from Virgin Hyperloop One (VHO) today hosted His Royal Highness Mohammed bin Salman bin Abdulaziz, Crown Prince and Minister of Defense of the Kingdom of Saudi Arabia during his visit to Virgin Galactic test site in the Mojave desert.

Other discussions in the meeting include how the proposed transportation system will diversify Saudi Arabia’s industries; stimulate job and economic growth, and nurture innovation and manufacturing sectors, as the country’s Vision 2030 looks forward to increasing it’s GDP 1 to 2%.

“We are looking forward to advancing the relationship between Saudi Arabia and VHO while we develop innovative transport technologies like Hyperloop, accelerating Vision 2030 objectives to transform the kingdom from a technology consumer to a technology innovator,” said Crown Prince Mohammed. “Hyperloop is the catalyst to enable all 4th generation technologies to flourish in the Kingdom while creating a vibrant society and thriving economy through visionary cities and high-tech clusters.”

Hyperloop transit system is expected to trim down trip times and significantly increase connectivity across the kingdom significantly, through its speed (about 3 times faster than a high-speed train) and “direct to destination experience.”

At the completion of the transport system, a journey from Jeddah to capital Riyadh which currently takes over 10 hours through the roads and roughly 95 minutes with direct flight would take just 76 minutes.

“It was an honor to host Crown Prince Mohammed and advance our discussions around the implementation of the Hyperloop system and Innovation Center facility, enabling Vision 2030 to nurture the nation’s entrepreneurial culture, and grow an innovative highly-skilled workforce through meaningful transfers of knowledge and technology,” said Josh Giegel, Virgin Hyperloop One co-founder and Chief technology. “The continued support from Crown Prince Mohammed and collaboration with Vision 2030 will allow the VHO system to connect with cities across the kingdom turning commute times from hours into minutes.”

Virgin Hyperloop CEO Rob Lloyd said: “We have started this journey through VHO partnership with the MiSK Foundation supporting bright, young Saudi talent through an internship exchange programme at the company’s Innovation Campus in the US.”

“Today’s visit and discussions kick off the next phase that will make VHO a reality in the Kingdom of Saudi Arabia,” Lloyd added.

The upcoming Rivian IPO shows how it’s Tesla’s biggest EV competitor in the making. We spoke to automotive industry experts to find out if Rivian Automotive’s initial public
22 hours ago