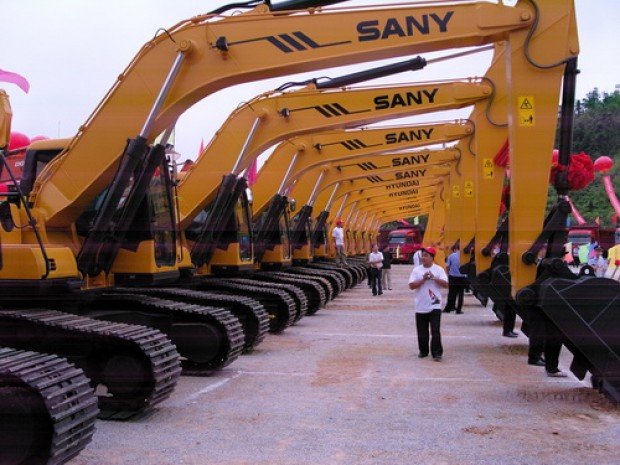 Often referred to as China’s Caterpillar, Sany Heavy, the largest construction machinery manufacturing company of China, is all set to launch its expansion phase despite volatile market trends, by  planning an IPO in the Hong Kong stock market later this month. Sany Heavy reportedly aims to raise around $3.3 billion from this offering.

The offering will include 1.34 billion shares of the company, valued at HK$16.13-HK$19.38 each, and will be handled by a consortium that includes the Bank of America Merrill Lynch, Citic Securities and Citigroup Inc. as joint global coordinators.

At a time when global stock market trading is witnessing a general low because of the unpredictability of world economies, Sany Heavy’s IPO in the Hong Kong stock market is likely to be Hong Kong’s second-biggest stock offering this year, following Glencore’s $10 billion IPO that took place earlier this year in May through its dual listing in the Hong Kong and London stock exchanges.

Sany Heavy’s co-founder Liang Wengen, listed as China’s richest man, with an estimated wealth of $9.3 billion, currently holds a 58% stake in the Sany Group. The IPO will mean a drop in Wengen’s shareholding in the company to 51%.

Sany Heavy, based in Changsha, the capital of Hunan province in southern China, announced by way of a media statement by Tang Xiuguo, president and co-founder of Sany Group, that the company will actively be looking at expanding sales in India, Brazil, Indonesia, the Middle East and Africa following the IPO.

Specifically, Tang indicated that Sany Heavy is likely to invest in Africa in exchange for resources from the continent.

China accounts for 40 pct of global construction machinery sales, and companies like Sany Heavy and rival XCMG Construction Machinery have benefitted as much from the global demand for such machinery, as they have from the construction boom China has been undergoing since the past decade.

“Conducting a share sale today can help us expand overseas in a faster, better and smoother way,” Tang said.

Sany is reportedly planning to use about half of the proceeds raised through the IPO towards building new plants and expanding capacity for excavators, crawlers and cranes.

Hinting at overseas acquisitions that might be in the pipeline, Tang said in the interview, “We have some opportunities and we are in talks on some businesses, including mergers and acquisitions (and partnerships with) some specialized enterprises, including some family businesses, which have very good professional skills and a certain group of clients.”

Established in 1989 as a small welding material factory by founders Liang Wengen, Tang Xiuguo, Mao Zhongwu and Yuan Jinhua, the Sany Group has now grown into a global corporation with five industrial parks in China, four R&D and manufacturing bases in America, Germany, India and Brazil, and 24 sales companies around the world. The group, with a current market value estimated at $18 billion, employs over 60,000 people in more than 120 countries.

Market analysts are of the opinion that the Sany Heavy IPO is likely to pave the way for other large deals in the near future.

According to a recent Reuters report, Sinohydro, a Chinese state-owned hydropower engineering and  construction company, also estimated as being the world’s largest hydroelectric company, has announced plans to launch a $2.7 billion initial public offering this week.

Sany rival XCMG Construction Machinery Co., while having postponed the launch of its around US$2 billion IPO to later this month, still plans to list in Hong Kong on Oct. 12.