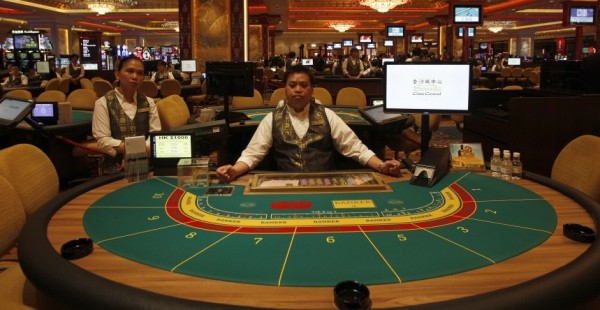 Las Vegas Sands Chairman and CEO Sheldon Adelson, the U.S. billionaire, launched its long-delayed fourth resort, Cotai Central on Wednesday. It is a $4.4 billion complex that is its latest bet on continued strong growth in the world’s biggest gambling market.

The executives of Sands China Ltd. inaugurated the Sands Cotai Central opening the doors to a traditional Chinese dragon dance, high-wire tightrope performance and the unveiling of a 5,500 pound bronze and gold ‘God of Fortune’ statue. Completion and launch of the massive Macau casino operator was delayed several years by the global financial crisis and worker shortages.

Security guards said, “People started lining up to get in Sands Cotai Central about five hours before the grand opening, and the queue snaked around the side of the building by the time the doors opened”. The resort will open in stages. The first phase has 340 gaming tables and 40 VIP rooms for high-rollers. Another 200 tables will be added later this year. Paintings of snowcapped peaks on the casino floor and fake boulders in the shopping mall are aimed at evoking a Himalayan mountain theme.

There are no more new casinos are expected to open until at least 2015. This is because of the time needed for government approval and construction. Sheldon Adelson said, Sands has already planed its next project – a 3,600-room resort on a nearby plot for which it is currently seeking planning approval. Cotai Central is the 35th casino to open in Macau, the only place in China where casino gambling is legal. Macau’s gambling revenues rose 27 percent in the first three months of 2012, after rocketing 42 percent last year to $33.5 billion, more than five times the amount earned by Las Vegas Strip casinos. Growth has been powered by hordes of wealthy high-rolling gamblers from mainland China, who are estimated to account for more than two-thirds of total gambling revenue.

Adelson said, “We hope to move some dirt around, do some compacting of the earth, and put in pilings by the end of this year,” with construction taking 24 to 30 months”.

Sands’ rivals in Macau, including Wynn Resorts Ltd. and MGM Resorts International, are also waiting for government approval for projects they’re planning for the Cotai Strip, inspired by the famed Las Vegas Strip. Cotai is an area of reclaimed swampland named for the two islands it connects, Coloane and Taipa. Adelson said the new casino sits on a site originally intended for a fireworks factory. Across the street are two other Sands properties, the Venetian Macao and Plaza Macao.

The new resort’s Holiday Inn, Sheraton and Conrad hotels will have a total of 5,800 rooms when they are fully open by next year. A fourth hotel tower is in the planning stages that will cost $500 million to $600 million, bringing total cost to $5 billion, Adelson said at a press conference ahead of the launch.

Michael Paladino, an analyst at Fitch Ratings said, “The Cotai Central opening will fuel increased market share for Sands because it will be the last major opening in Macau for the next couple of years”. Sands is expected to benefit from growing numbers of middle-class visitors drawn to shopping and other non-gambling attractions at Cotai’s resorts. Construction on the Cotai Central project began five years ago but was frozen temporarily in late 2008 after financing dried up in the wake of the financial crisis. Government restrictions on foreign workers also delayed the opening date by three years.