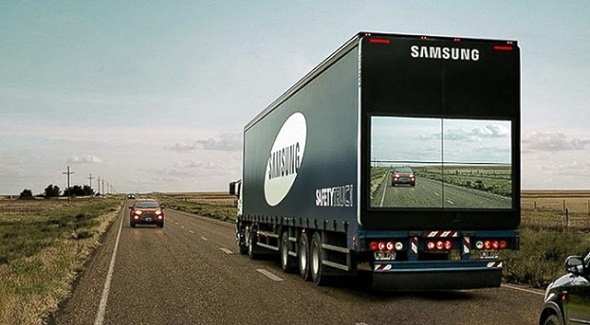 Recently, search engine giant – Google has introduced self-driving car endeavor, delivering reports on car accidents occurring on its vehicles. So far experts have assumed that accidents only occur when humans are in control of the vehicle – that seems to show that people are the cause behind their own problems on the road. But, Google stated that the driverless vehicles can perform better without human intervention and errors.

Similarly, Samsung has unveiled its first safety vehicle called the Samsung Safety Truck. The company’s new prototype promises to save lives of the human by keeping driver in the driver’s seat, with a wireless front-facing camera that is live streaming back on its doors, just like a transparent glass, so drivers following the over-size vehicle can see what is ahead. This allows drivers to have a better vision, deciding; whether it is safe to overtake or not.

Samsung’s prototype model also carries four outdoor rear monitors to project the traffic condition, by this way, truck drivers can view what is ahead, as well as drivers behind can view, what’s ahead and beside the truck that helps them to take quick decisions. The concept adds an essence of the traditional long-distance trucks, using technology to assist both truck driver and trailing traffic.

Another advantage of Samsung’s transparent Safety Truck is that it might reduce the risk of accidents caused by sudden braking or animal crossing the road. The most exciting part, its cameras are also available with a night mode vision capabilities – it means Samsung has embedded technology that works in both day and night.

Samsung said that it has tested new prototype in Argentina with some B2B clients in the city, and noted that the test vehicle is no longer operational. Argentina was selected by the company because it thinks that it is an ideal place for testing the technology, due to its two lane roads alleged for a large number of traffic accidents.

Samsung noticed its new innovative model would certainly hopes to launch this vehicle worldwide, including to the United States. The company promises to keep developing the technology with the assistance of government regulators and nonprofits.

The brand is well-known for its AMOLED smartphone, washers, dryers tablet displays, refrigerators, and TVs. But given the implications for driver safety – the Samsung Safety Truck may well outpace all of them.