South Korea’s tech giant Samsung Electronics Co. announced the release dates and prices for the company’s 2014 Ultra HD lineup. The company is rolling out new series of curved and flat screen Ultra HD TVs that will come in a variety of sizes ranging from 50-inch models to a gigantic 105-inch model, optimized for U.S. consumers. 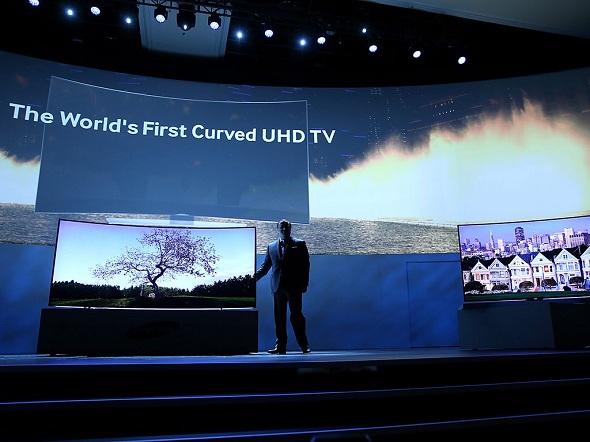 The company is rolling out new series of curved and flat screen Ultra HD TVs that will come in a variety of sizes ranging from 50-inch models to a gigantic 105-inch model, optimized for U.S. consumers.

Samsung’s new 2014 Curved UHD TVs deliver a bold and optimized picture quality. The curved screen gives videos a wider field of view and creates a panoramic effect that makes the display look even larger than it is.  The proprietary technology converts Full HD, HD and lower resolution sources to nearly-UHD clarity through a unique four-step process that includes detail analysis, upscaling, noise reduction and signal analysis.

This year all of Samsung’s UHD TVs support today’s standards — including HEVC(H.265) video-file decoding, HDMI 2.0, MHL 3.0 and HDCP 2.2. All of Samsung’s sets in its UHD line will be powered by the company’s One Connect box which essentially houses the brains of the TV externally, allowing users to switch out the box with the latest Samsung UHD Evolution Kit.

Samsung’s monstrous 105-inch  display stands out from the rest not only due to its size, but also because of its cinematic 21:9 aspect ratio resulting in a spectacular display with 11 million pixels. Samsung hasn’t yet disclosed the pricing of this gigantic 105-inch model but is expected to be available in the second half of the year.

Samsung’s U9000 series is for all practical purposes the real flagship line for the company this year. It includes exclusive technology that delivers incredible life-like UHD picture quality on a cutting-edge curved screen. U9000 Curved UHD TV will be available from March in a 55” model for $3,999.99 and 65” for $4,999.99. A 78” model will also be released later this year for $7,999.99 respectively. It’s new proprietary Auto Depth Enhancer, an algorithm which automatically adjusts contrast in specific areas in an effort to impart a deeper, 3-D-like feel without the glasses. The series also features Samsung’s PurColor™ technology for best brightness enhancements. The new series of Samsung curved screens will be wall-mountable using conventional VESA standard hardware.

This series delivers an incredible, lifelike UHD 4K picture. With Precision Black local dimming, contrasts are enhanced while UHD dimming perfects brightness. The TV’s bezels and profiles are ultra thin and extremely narrow – 7 mm (0.27-inch) for the bezel and 1.2 inches thick. The U8700 Curved UHD TV will come in just two sizes. Expect a 55-inch and 65-inch screen sizes. Pricing is yet to be determined.

The New Standard of LED TV

This year, Samsung is introducing two premium series of 1080p LED television, and one of them is curved. Here are the details:

This Curved LED TV offers a wider field of view, amazing picture quality and breakthrough motion blur reduction technology giving people the uninterrupted, incredible experience they demand along with all the content they want with Samsung’s Smart TV offerings. The series will be available this spring with a 55” model costing $2,499.99 and a 65” model for $3,399.99. Samsung will follow up with a 48-inch model in May priced at $1,999.99.

Samsung’s best flat LED TV series for the year has a streamlined design that looks impressive with any décor. This series features Samsung’s best processing and backlighting technology that delivers incredible picture with enhanced colour, contrast and detail. It also boasts of Quad Core power split screen for snappy navigation and Smart TV access. Samsung also says viewers can stream content on the TV directly to their mobile devices. The company is planning a spring time roll-out for the four models. The 55” model will be available for $1,899.99, 60” model for $2,199.99, 65” model for $2,699.99 and a 75” model will cost $3,999.99 respectively.

Two tweets were posted using NFT artist Beeple’s account. The first one promoted an exclusive collection with Louis Vuitton. The second tweet announced that Beeple would soon rel
52 mins ago