South Korean tech giant Samsung officially launched yet another tablet known as Galaxy Tab S at an event in New York on Thursday. The Galaxy Tab S is marketed as a high-end tablet, which could give  tough competition to Apple’s iPad Air and iPad mini. 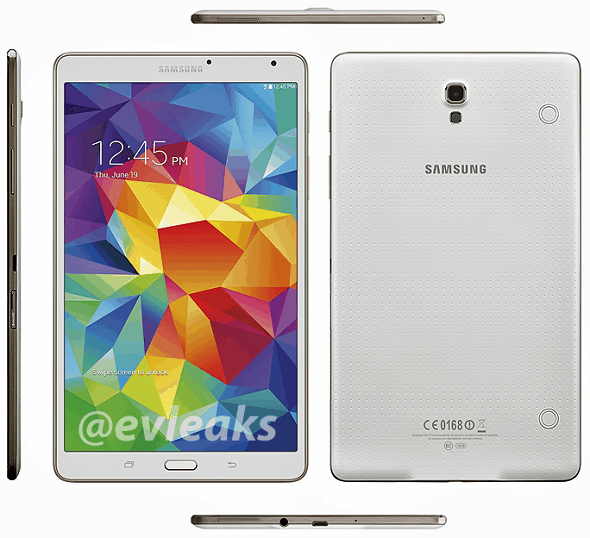 The Galaxy Tab S comes in two models, one a 10.4-inch and another 8.4-inch model. Both tablets are very thin and light measuring just 6.6 millimeters thick, that’s thinner than the iPad Air, which is 7.5 millimeters thick. The 8.4-inch screen version weighs 294g while the 10.5inch model tips the scales at 465g, which is just a little under the iPad Air’s 469 g weight. Both variants will be available in dazzling white and titanium bronze.

The biggest selling point of the Galaxy Tab S devices is the patented Samsung Super AMOLED display that produces 2,560×1,600 pixels or twice the definition of HD quality that uses less power than traditional LCD screens. Both are powered by either Qualcomm Snapdragon 800 or Samsung Octa-core processors (2.3GHz quad-core) for LTE models and  Exynos 5 Octa processor (1.9 GHz quad-core + 1.3 GHz quad-core) for Wi-Fi models depending on the market. Besides that, both tablets feature 3GB of RAM, NFC, 16GB or 32GB of internal storage, microSD expansion up to 128GB, an 8MP rear-facing camera, 2.1MP front-facing camera and will be running the Android 4.4 KitKat operating system. On the battery front the Tab S 10.5 features a 7,900mAh battery, while the Tab S 8.4 features a 4,900mAh battery, both are slated to last for 11 hours while playing video.

In addition, Samsung’s magazine service, “Papergarden” will also debut on the Galaxy Tab S. According to Samsung, the magazine service will enable users to view an array of publications. It will be initially launched in the UK, US, Korea and Brazil, with further countries to follow. The company has also partnered with more than 30 mobile and content service providers, including Marvel and Amazon. Users will be able to gain access to over 15,000 Marvel Comics through three months of unlimited free membership to Marvel Unlimited app.

Similar to the Galaxy S5, the Galaxy Tab S also has a fingerprint sensor installed in the home button which can be used to unlock the device without a passcode or make payments through PayPal.

In the US, Samsung will begin the pre-orders on June 19th for both the variants. Shipments will happen on June 26th. The pricing is similar to the iPad Mini and iPad Air with the WiFi models of the Tab S 8.4 costing around $399.99, while the Tab S 10.5 will be priced at $499.99. Samsung will launch a 4G LTE version later.

The CEO’s outlook is far more optimistic than other automotive industry leaders who believe it may last up to 2023-24.
15 hours ago