Korean phone manufacturer Samsung is reportedly expected to announce its highly-anticipated Galaxy S5 at its Unpacked event at this year’s Mobile World Congress (MWC) in Barcelona, an industrial trade-show. The firm has also released a teaser image for its upcoming Galaxy S5 unveiling that suggests that the Samsung Galaxy S5 is going to be one of the boldest and high powered mobile devices seen. 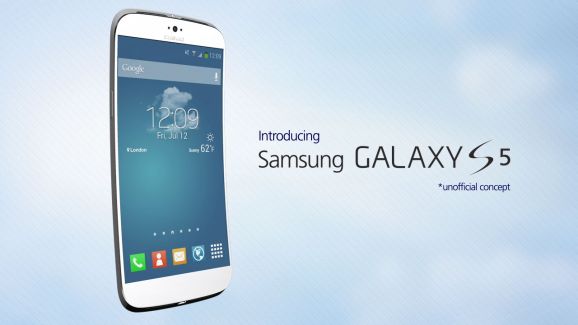 It is expected that there will be two versions of the S5, which will be equipped with all the latest hardware and technology. The premium model is likely to feature a 2.5GHz quad-core Qualcomm Snapdragon 805 chipset processor, 3GB of RAM, 32GB of internal storage and a 2K resolution display, while the lower grade model will have an octo-core chip clocked at 1.5GHz Exynos 6 processor coupled with 2GB of RAM and 16GB of storage.

Sources suggest the design of the SGS5 will be rather sleek, but nothing extraordinary. The material of the Galaxy S5 is still unknown at present. In July 2012, Samsung had patented a smartphone that has no hardware buttons on the front of the handset which was submitted to the United States Patent and Trademark Office, perhaps the patent could be possibly used for the S5.

While it is still unclear whether Samsung will be scrapping its Super AMOLED display for an LCD display, the S5 will possibly feature a 5.25” AMOLED screen with 2560*1440 pixel resolution (2K) at 560 pixels-per-inch (ppi).

According to reports, in December Samsung’s research and development division started work on a project to develop a 20MP camera sensor from scratch. While the project cannot be completed before midway of 2014, it is unfeasible that the Samsung Galaxy S5 will sport a 20mp camera. Rumours suggest the device would include a 16 megapixel rear camera and a 2 megapixel front camera.

The S5 will reportedly feature a new hover function in which the company will use Synaptics technology to enable 2-point hovering, Synaptics stocks will team up with Samsung to provide touch control components for the Galaxy S5.

Reports suggest that the Samsung Galaxy S5 would be equipped with a finger scanner, the finger print scanner will be embedded into the bottom right and bottom left hand corners of the display as activation points, as opposed to the whole screen surface.

Rumours point towards a 2,900 mAh battery in the Samsung Galaxy S5, while previous reports have hinted at a 4,000mAh battery. The battery will include rapid charging technology which can charge from 0-100% in about two hours.