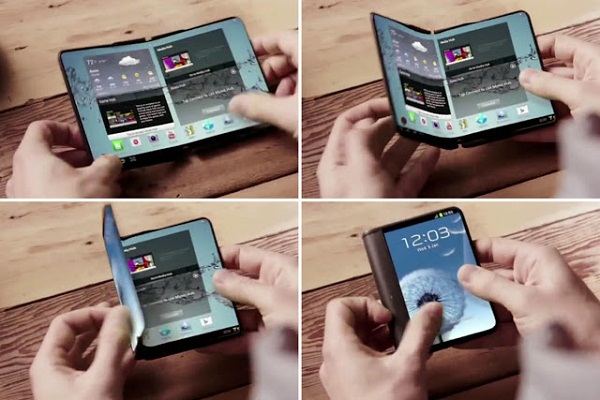 South Korean smartphone giant Samsung had shown a few demos of their foldable displays in recent years, and rumours are starting to surface that the company is reportedly launching world’s first foldable smartphone as early as January 2016. This makes it likely to see an announcement from Samsung at CES which is held in the first week of January every year.

As per reports the smartphone is code-named as “Project Valley” and the foldable phone is currently undergoing testing in China.

The news first surfaced on Weibo, and indicates that the company is reportedly testing two hardware configurations. One is running with the Snapdragon 620 processor that comes with a 64 bit octa core processor with maximum clockspeed of 1.8 GHz along with LTE and Quick Charge 2.0 technology. The other is running with a faster Snapdragon 820 processor that is currently in the news for its support for high speed data speeds of up to 600 Mbps. This octa core processor is said to come with the latest Quick Charge 3.0 technology which claims to charge a phone battery from 0 to 80 percent in just about 35 minutes. The foldable smartphone will likely feature 3GB of RAM, a microSD card slot, and a non-removable battery.

In the past, Samsung has teased us with foldable displays at major technology conferences. At CES 2013, Samsung showcased its new Youm flexible OLED displays. The tech giant said it was capable of making a high-resolution display on very thin plastic instead of glass, so the display can be bent at various angles without shattering. Earlier in June this year, a Samsung patent surfaced which indicated towards a foldable tablet display which could fold up to two times, and form a single device.

Currently, no other detail about the rumored foldable smartphone is available. The report also says the device is not the Galaxy S7 and could only be released in South Korea.

Samsung is also largely credited for pioneering several trends in the smartphone industry like launching phablets and phones with edge display. Recently, the company unveiled world’s first smartphone with a dual-edge curved display, named as Galaxy S6 Edge which is available in three variants – 32GB, 64GB, and 128GB.

The world’s first Super AMOLED smartphone display was launched in 2010 and its Galaxy Round was also world’s first smartphone with a curved display. A foldable smartphone, if launched, would yet again place the South Korean giant ahead of competitors.

Anna Domanska
Anna Domanska is an Industry Leaders Magazine author possessing wide-range of knowledge for Business News. She is an avid reader and writer of Business and CEO Magazines and a rigorous follower of Business Leaders.
« Twitter Partners With Stripe to Launch Mobile-Friendly Ecommerce Service
Hewlett-Packard to Slash Up to 30,000 Jobs in Enterprise Business »
Leave a Comment
Close