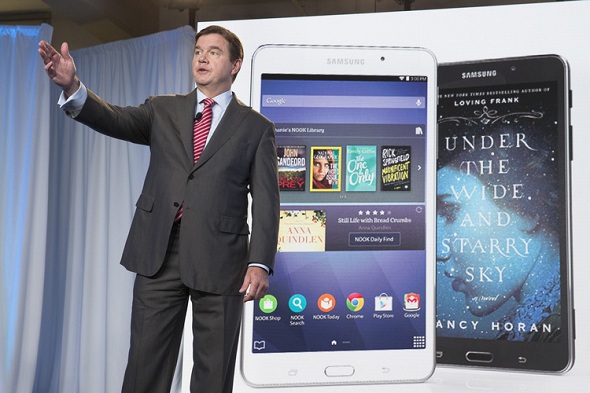 Mike Huseby, CEO of Barnes & Noble, during the unveiling of the Samsung Galaxy Tab 4 Nook

The Galaxy Tab 4 Nook was announced on Wednesday at an event held at Barnes & Noble’s store in Union Square, New York City. The American bookseller released an existing Samsung tablet as a replacement for the Nook HD+, which it manufactured and launched in 2009. The device is being marketed as the first-ever full-featured Android tablet optimised for reading that tie it into the Barnes & Noble e-reading experience.

According to a release, the device includes more than $200 in free content from the NOOK Store such as popular TV shows, bestselling books, magazines and more. The tablet will essentially operate as an Android-powered Wi-Fi tablet with additional features layered on that, based on its inclusion of pre-installed Nook apps and homescreen shortcuts.

“The Samsung Galaxy Tab 4 NOOK is the most advanced NOOK ever, delivering the great NOOK experience our customers have come to love, with the high-performance tablet features they’ve asked for,” said Michael Huseby, Barnes & Noble chief executive, in a statement.

The tablet is now available in more than 660 Barnes & Noble bookstores and also online for $179 after a $20 instant rebate, the same price what the Tab 4 is currently selling for at Best Buy.

The tablet features a 7-inch LCD display with 1280 x 800 pixels of resolution. Weighing around 276 grams and 8.89mm, the company claims that this tablet is lighter and sleeker than any previous Nook device. The tablet comes equipped with a 1.3-megapixel front-facing and a 3-megapixel rear-facing camera for photos and video chats, something that wasn’t seen in the previous Nook devices. It runs on a 1.2GHz quad-core processor with 1.5GB of RAM and also has a built-in storage of 8GB that can be expanded further up to 32GB via microSD card slot. One can also find dual speakers with a built-in jack.

In addition, the tablet also comes with support for Wi-Fi and is loaded with the complete suite of Google applications featuring Chrome Web Browser. The device also gets built-in GPS capabilities for location-based apps and more. Besides that, Samsung has also included Multi Window innovation, enabling users to simultaneously use more than one app and share content between apps at the same time.

Barnes & Noble announced earlier this month that it was teaming up with Google to provide same-day shipping for online book orders in an attempt to take on online mega retailer Amazon. The two recent partnerships are absolutely necessary for Barnes & Noble to ensure its survival in a rapidly-changing book culture and market.