Sale of Apple iPad soars over 3 million over first weekend 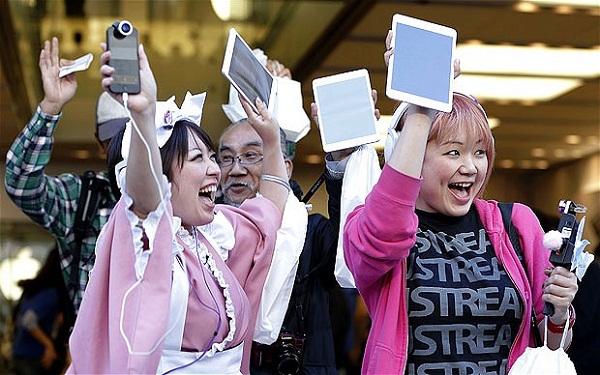 Apple Inc. has sold nearly 3 million of its new iPads in just three days of its availability in the market. The huge Apple iPad sales have been registered in just three days the tablet computers have been available. This has driven a strong optimism for the holiday shopping season‘s sales amidst increasing competition. Compiled data showed that the sales of the iPad mini 7.9 and the 9.7 Wi-Fi models topped the sales of  Wi-Fi iPad that was sold in the month of March for the first weekend.

The numbers for the new Apple iPad sale in 1st Weekend have not been broken out by Apple Inc. yet. The iPad mini, which is actually a miniature version of the actual tablet, was designed by Apple Inc. to cement a place in a sector that is dominated by Kindle Fire of the Amazon.com Inc and the Nexus 7 of Google Inc. The nearly three million iPad mini sale has vastly surpassed the originally estimated 1 to 1.5 million for the first weekend. The latest quarterly earnings of the company, which let down Wall Street, have been boosted in the holiday quarter by the great Apple iPad sales. The new Apple iPad sale in 1st Weekend has heightened the competition of the companies over the reign in the market. Microsoft Corp. has recently entered  the market with its all new Windows 8 driven devices. Even though the lines for the new Apple iPad sale in 1st Weekend did not seem to be too high at the beginning, the demand gradually became so strong that they practically sold out all the iPad minis.

This is the first time that American giant has released two different iPad models in the same quarter. Tavis McCourt, an analyst with Raymond James, highlighted that the three million iPad mini sale in the first weekend itself was quite an achievement. But Apple iPad sales would at least need to be another 20 million in the current period so as to get to his estimate. He also added the fact that there was quite a lot of work to be done yet. According to reports, the company had already shipped quite a lot of the new iPads before the date of release but some more would be sent out only towards the end of this month. The three million iPad mini sale in the first weekend is according to chief executive officer at Apple Inc., Tim Cook, a new release record and the company is looking forward to meet the high demands effectively.

Significant sales for the holidays:

Shares of Apple Inc., even after the three million iPad mini sale, have remained 17 percent below the high record that had been set for the month of September. The strong Apple iPad sales came in spite of the fact that both the fourth generation iPad and its mini version had been priced quite higher than the competing levels of most of these devices available in the market. Rising speculations in the market that the high prices might hurt the Apple iPad sales has been proven wrong in the first weekend at least.