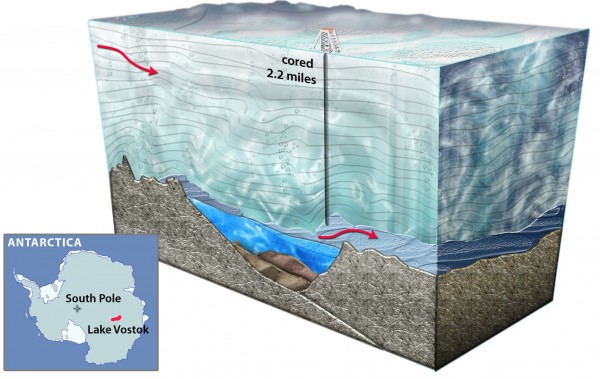 The lakes are very rich in oxygen. This makes them oligotrophic, as the scientists call it, with levels of the element nearly 50 times higher than to be found in your typical freshwater lake. The high gas concentration is thought to be because of the enormous weight and pressure of the continental ice cap.

If life exists in Vostok, it will have to be an extremophile. Extremophile is a life form that has adapted to survive in extreme environments. The organism that is able to withstand high pressure, constant cold, low nutrient input, high oxygen concentration and an absence of sunlight, would fall under this category.

Scientists believe the Vostok Lake could be home to cold-loving microbial life, that have adapted to living in total darkness. These organisms likely survive using mechanisms similar to the ever-increasing parade of creatures that have been discovered living in the total darkness of hydrothermal vents at the bottom of the ocean, deriving energy from minerals in seafloor rocks.

John Priscu, a University of Montana microbiologist and veteran Antarctic researcher who has been involved in Lake Vostok investigations for years, gave a statement to the industrial magazines saying, “There are a lot of rumors going around about penetrating the lake, and we need the Russian program to make the official announcement.”

Sergei Lesenkov, spokesman for the Arctic and Antarctic Scientific Research Institute, told a business magazine in Moscow that there was the possibility of a fundamental scientific development.

Sergei Lesenkov said, “Analysis of the composition of gas bubbles discovered in the ice above the lake could help climate change research. Because the lower layer was formed 400,000 years ago, from the composition of the gas it is possible to judge the gas composition in the atmosphere 400,000 years ago and during the time that has passed since the formation of the lake. From there, it is possible to identify and forecast certain climatic changes in the future. This is very important.”

“Our scientists completed drilling at a depth of 3,768 meters and reached the surface of the sub-glacial lake,” an unnamed source told Russian state news agency RIA Novosti.

It has taken over 20 years for the Russians to drill into the lake of Antarctica, operating in some of the most brutal weather conditions in the world. The Russian effort has created scientific excitement about potentially learning some of the long-held secrets of the largest sub-glacial lake in Antarctica, a body of water that wasn’t discovered until the mid-1990s and is the world’s third-largest lake by volume.

The Vostok team has been competing against the approach of Antarctica’s cruel winter weather. Extreme cold climate in Antarctica can prevent aircraft from operating, and could maroon the team at the station during the total darkness and bitter temperatures of austral winter.