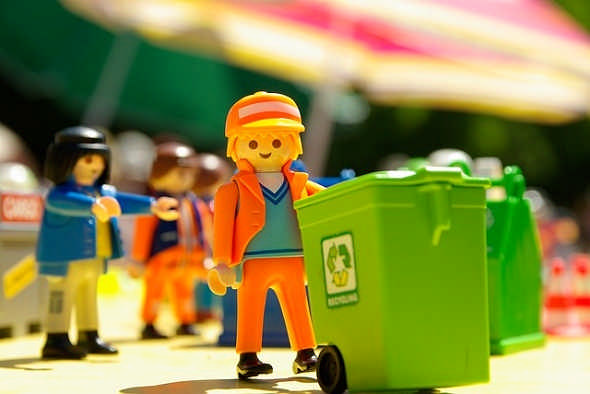 Rubicon’s new app is similar like Uber, for picking waste materials or trash bin from your doorstep.

Rubicon Global – a North America’s leading provider of recycling waste solution company has now come up new concept like Uber. The concept introduces the invention of a new application that picks your garbage via Rubicon’s trash pickup app. The move was taken that covers both environmental and financial aspects at up front.

Earlier this year, the company vested $30 million to deal with garbage business. It will make use of this amount to scale operations nationwide and will vest a large portion of it in R&D projects for developing a new recycling technology. In second quarter of the year, it continues to disrupt the garbage industry by introducing a trash pickup app. Rubicon’s new app is similar like Uber, for picking waste materials or trash bin from your doorstep.

The new application model is simple; where a worker comes and picks your trash bag, just by tapping on the app. Co-founder and CEO of Rubicon Global – Nate Morris said that the company has decided to introduce a new recycling concept, and it does not own any landfills or trucks to carry waste materials. The company aims to help small and large companies, who wish to contribute towards society and reduce garbage expenses. The new app service will offer different alternatives for companies, as well as make sure that trucks are always loaded with trash bags or garbage materials. Rubicon expects to develop entire process more efficiently that is also cost-effective and less wasteful.

Rubicon’s strategy considers a huge implications for both aspects, such as, cost factor from collecting garbage, contributing more in recycle process, and ensuring that waste materials are transported to recycling center than dumping to landfill.

A person familiar with the matter stated that Rubicon’s new project is getting paid with huge amount based on the factors like help clients, and how much recyclable products it can sell off. Thus, by reallocating the revenue model, how much amount of trash it can move from landfill; still remains a question mark for the company. But, the company officials stated that Rubicon is establishing a valuable garbage business, which does not trash the universe.

Initially, the company focused on the corporate sectors; aiding Fortune 500 firm deal with the bulky amounts of waste they generated every day, and believe that the residential market will prove even more engaging.

The similarities between Uber and Rubicon’s new app are not by accident – Recently, Rubicon formed new management by appointing new CTO – Phil Rodoni – Ex-VP of software at Esurance, and CTA – Oscar Salazar – founding CTO of Uber in the company.

The new trash app will launch soon in the coming months, and Rubicon is confident and optimistic about the success of its new app.