Rolls Royce Plc. displayed four futuristic digital technologies to repair engines at Farnborough Airshow press conference. In association with the University of Nottingham, one of the research arms of Rolls Royce University Technology Centre (UTC), the British engine maker is working on multiple projects to revolutionize engine maintenance in near future. The company devoted £1.4 billion on research and development in 2017.

At the event, Rolls Royce presented crawling robots that travel inside engines to inspect them, eliminating the need to take them off from an aircraft.  It demonstrated snake-inspired robots which pave their way through the engine and mini, cockroach-like robots that creep directly into an engine along with other such technologies.

Richard Goodhead, Rolls Royce Senior Vice President – Marketing, stated addressing the event, “The advancements we are making in robotics are a great example of us bringing our IntelligentEngine vision to life.”

In alliance with University of Nottingham and Metallisation, Rolls Royce showed off a pair of ‘snake robots’ which travels through the voids between the different engine components, like an endoscope. The purpose of FLARE robots is to execute patch repairs on the scratched thermal barrier coatings.

“By exploring how we might use the rapid progress we are seeing in fields such as digital and robotics, we are ensuring that Rolls-Royce will continue to lead the way in service innovation, offering the very best value for our customers,” Goodhead added.

Similar to snake-like robots, the British engine maker revealed a set of cockroach-like called SWARM Robots to check engine defects without having to remove it from the main body. Rolls Royce teamed up with Harvard University and the University of Nottingham to built on this project. SWARM is a cluster of mini robots, each measuring around 10 mm in diameter. In future, the company would drop these robots – embedded with the camera – at the core of the engine via FLARE to carry out inspection procedures. Simultaneously, a human operator will supervise this live video feed broadcasted by SWARM team and inspect the hard-to-reach areas in the massive engines without any physical contact. 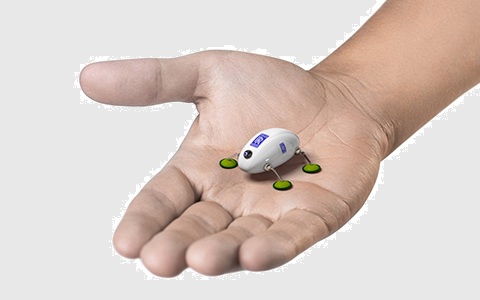 It is a different set of pencil-sized autonomous inspection officers integrated permanently into the engines. INSPECT robots form a network of periscopes that regularly monitor insides of gigantic machines and report if any repairs are required under Engine Health Monitoring systems initiative. These robots are thermally sheltered from the excessive heat generated in an engine. This engine maintenance project of Rolls Royce is accomplished in collaboration with Oxsensis, BJR Systems, Roke Manor and the University of Nottingham.

In order to get rid of the need for specialist teams to travel to the site of an aircraft requiring maintenance, Rolls Royce and the University of Nottingham have teamed up to invent a “robotic boreblending machine” that can be controlled by specialist engineers from a remote location.

To elaborate, this means that to perform a complicated maintenance task, for instance repairing damaged compressor blades using lasers to grind parts, a non-skilled local team could simply install the robotic tool in the damaged engine and then hand over its control to a specialized team residing in Rolls-Royce’s Aircraft Availability Centre who would then control its work remotely.

“While some of these technologies, such as the SWARM robots, are still a long way from becoming an everyday reality, others, such as the remote boreblending robot, are already being tested and will begin to be introduced over the next few years,” said Dr. James Kell, Rolls-Royce On-Wing Technology Specialist.

All the projects, collaboratively, have potential to improve the repair service efficiencies by minimizing the cost of maintenance (money saving), speeding up any maintenance requirement (time cutback) and increasing the availability of an engine (effort reduction).