While the shipping industry is at the heels of standards in comparison to developments in aviation industry, there have been talks about advances since last few decades. Disappointingly the scenario hasn’t changed much.  Every now and then, news or statements surface hinting at a new technology to change the face of the industry some of which happen to be as ephemeral as an ant’s life span.

To nobody’s surprise this year, luxury car brand Rolls Royce’s Maritime division has announced progress on developing unmanned drone ships to change the face of the shipping industry. In a world of automation where robots are replacing humans in the field of work, the company is a step ahead by designing ships in a manner that it would need no crew from ground up and no robot on existing ships to command control. 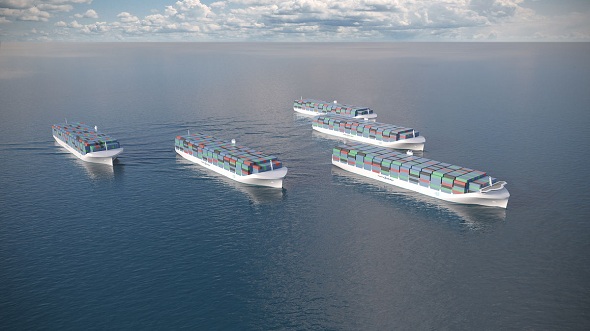 Oskar Levander, the company’s Vice President of Innovation in Marine Engineering and Technology said that drone ships can offer much safe, cheaper and less polluting prospects for the $375 billion shipping industry that carries almost 90% of world trade.

Rolls-Royce’s Blue Ocean development team is currently on amending and improving designs for mammoth drone ships at its office in Alesund, Norway.  The unmanned cargo ships will be equipped with camera’s that replicate  360-dregree views from the vessel to dry land where captains will be commanding them using a virtual-reality recreation of a vessel’s bridge. It means that machines will now monitor all lashing, chains and straps. Machines will monitor tension on the line through a sensor in events that occur during the voyage.

The development on the drone ship designs began a year ago. Rolls Royce’s Blue Ocean Development team supposed that the unmanned ships could offer a safe, clean and less-expensive option for moving cargo.  Rolls-Royce has plans of expanding into making plane engines and turbines in the near future.

Oskar Levander, the company’s Vice President of Innovation in Marine Engineering and Technology said that drone ships can offer much safe, cheaper and less polluting prospects for the $375 billion shipping industry that carries almost 90% of world trade. On an average, $3,300 per day is the cost of crew on the ships, cost of pilot age at the beginning and end of voyages and at risk points, a figure amounting to 44% of total operating expenses.

The European Union had recently financed the Maritime Unmanned Navigation through Intelligence in Networks project by funding $4.8 million. It aims at developing and validating the concept of an autonomous ship which can be defined pretty much as a vessel primarily guided by automated on-board systems and secondarily controlled by remote operation in a shore side control station. Apart from this initiative, a few others initiatives are aimed at reducing shipping costs. For example, is a vessel is groups with metal sails, it could reduce fuel costs by 30 %.

On a concise portrayal on the vessels design, Levander stated that it will be loaded with containers from front to the back, as shown in the image. The structure will be designed in such a manner that it will be devoid of supporting crew lives. The ships will be able to cut costs and boost revenue by replacing the bridge, and other systems that support crew including air conditioning, electricity, water and sewage. The resulting into making the ships 5 % lighter before loading cargo and help burn 12-15% less fuel.

The unmanned ships will also result into reduced piracy, since there would be no crew to capture and hold as hostage by pirates.

Currently marine accounts for 16 percent of Rolls Royce’s annual revenue. The drone ships could be positioned in regions like the Baltic Sea within a decade. Regulatory hurdles, maritime companies, engineers, insurers and union skepticism regarding cost and safety is ought to hold back global adoption of drone ships. It also includes international minimum crew requirements and an ineligibility to get insured by insurers.