For anyone who has used a lawnmower knows exactly how it splutters clipped grass directly back onto the lawn. EcoMow team has a better option than leaving a bag full of clippings mixed with organic waste to compost – Use them for power! Jason Force started thinking on this idea about five years ago on creating a lawn mower that might be able to power itself with the grass it harvested.

EcoMow Technologies a startup founded by CEO graduate student Jason Force from George Mason University have created a prototype of a self-guiding robotic lawnmower that uses cuttings from lawn to create a kind of ‘grass biomass’ which can harvest as fuel. The unused pellet fuel can also be used for other tasks such as heating or power generation.

Basically, the team intends to deliver a platform for harvesting and processing grassy biomass and a fuel system technology to take advantage of the produced pellet fuel. The mower uses grassy biomass which is harvested as a fuel. The unused biomass gathered into a dried pellet form can be used for heating or power generation. 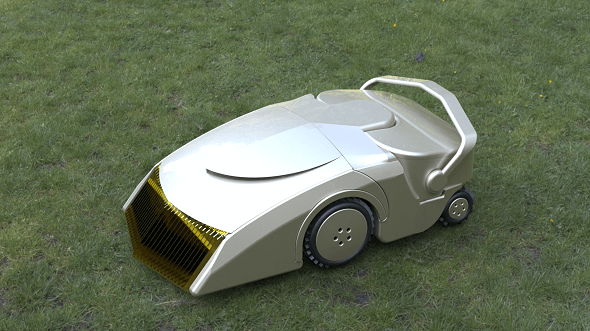 Robotic Lawnmower uses cuttings from lawn to create a kind of ‘grass biomass’ which can harvest as fuel. The unused pellet fuel can also be used for other tasks such as heating or power generation.

EcoMow uses an electrically driven bar cutter to mow the grass instead of a rotating blade. It then feeds the grass into a pelletizer thereby producing biomass pellets which is gasified in an onboard gasifier to power the device’s engine.

The EcoMow is also equipped with an internal alternator to generate electricity for the mower’s electrical components which include the computer control, guidance and communication modules.

Guidance for the EcoMow is levered by proprietary software which is driven by Google Maps. Its allows the mower to be directed to cut along the precise dimensions of the lawn and the mower hardware gathers data on usage and biomass pellet collection for determining what the return on investment is for the owners.

Jason Force says that by lowering the cost barrier to using biomass fuel sources, they are hoping to provide an eco-friendly renewable solid fuel technology that can be tweaked into existing vehicles. He believes that we can radically shift energy use from fossil fuels to biomass sources while lowering energy cost.

The current prototype has gathered a lot of interest for commercial purposes but the configuration of the robotic lawnmowers makes it more suited to large-scale applications.

The robotic lawnmower has a lot of potential to grow in commercial mowing operations, since it can benefit reductions of labor as well as eliminate fuel costs securing higher profit margin from resale of processed biomass. In developing economies it can be useful in lowering the barrier to implement local fuel production sources for power, heating and equipment.

Jason Force is currently pressing on to have little micro grids set up in East Africa where units go into harvesting mode at night and plug themselves in to a power during the day and supply to the local region during the day.

Anna Domanska
Anna Domanska is an Industry Leaders Magazine author possessing wide-range of knowledge for Business News. She is an avid reader and writer of Business and CEO Magazines and a rigorous follower of Business Leaders.
« Federal Bill Proposes Kill Switch Technology To Be Made Mandatory On All Smartphones
Silicon Valley’s 4th Largest Technology Acquisition of Past Decade: Facebook Acquires WhatsApp for $19 Billion »
Leave a Comment
Close