RoBoHoN: A Mobile Robotic Phone that is Vaguely Useful, but Certainly Adorable 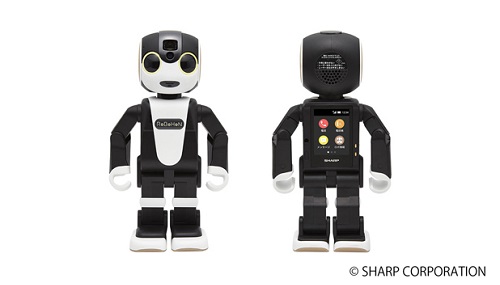 Japanese tech companies are known to keep tech-savvy audiences entertained by manufacturing every unimaginable and weird kind of robots possible on earth. One such company, Sharp Corporation has geared up to release its highly anticipated mobile robotic phone, RoBoHoN.

The makers showcased its prototype on Tuesday at a press conference held at company’s HQ. The latest robot-shaped prototype doubles as a mobile phone, or maybe it is a mobile phone in the get up of a robot, we don’t know. The mobile robotic phone is certainly a tiny, cute, and portable smartphone device. The humanoid mobile phone can walk and the 19.5 cm length makes it compact enough to be carried almost anywhere.

RoBoHoN was created in collaboration with Technology and CEO of robot development company Robo Garage Co., Ltd. and Project Associate Professor at the University of Tokyo’s Research Center for Advanced Science, Tomotaka Takahashi. The robotic smartphone device is the first, one of its kind mobile robotic phones to be manufactured in the world.

RoBoHoN is equipped with all basic functions of a smartphone device and runs on Google’s Android platform. For instance, phone, camera, and email, as well as a variety of services that can be accessed through specific apps. The robotic smartphone supports 3G and LTE networks. Projector*2 is a compact laser developed with the collaboration of Microvision Inc. of the U.S. and Sharp. It allows device owners to project maps, photos, and videos onto a wall or screen. Users can easily download dedicated applications to offer new services and functions to RoBoHoN.

What’s more? By learning the usage situation and profile of the user, this device can grow to offer space to additional natural communication done with a user.

According to analysts, RoBoHoN, the robotic smartphone worth USD $1,810 i.e. (198,000 yen), which is launching in Japan on May 26th, won’t generate much revenue for the cash-strapped Japanese company. Previously this month, the company signed a takeover deal worth USD $3.5 billion with Foxconn Technology Group.

At the news conference, Tomotaka Takahashi, the famed robot developer who worked on this project said,

“I can’t think of any other consumer products that are as challenging as this, at least in the recent years.”

Well, this robot smartphone makes Zuckerberg’s ‘$2 billion baby’ Oculus Rift look like a bargain. This is the era of expensive technology where cash keeps on flowing (even if the cash is to be spent on a robot smartphone that can dance).

RoBoHoN is certainly expensive, but then again, it can keep you entertained with a weird dancing style or animated voice (most of the times!).