RoboBees to Pollinate US Crops Instead of Real Bees

Softbank Acquires Boston Dynamics- Is This The End of Google’s Robotic Dreams?

The term “Colony Collapse Disorder” (CCD) has been engraved into our mind affixed with a mysterious phenomenon where Honeybees, which pollinate almost one-third of the food we consume, are dying at an expeditious rate. The total number of managed honey bee colonies in the US currently has diminished from 5 million in the 1940s to only 2.5 million.

The distressing situation has reach a peak, wherein in late June, the White House gave a new task force only 180 days to devise an adapting technique to protect bees and other pollinators. CCD for the most part is ascribed to a jumble of disease, parasites, as well as pesticides. 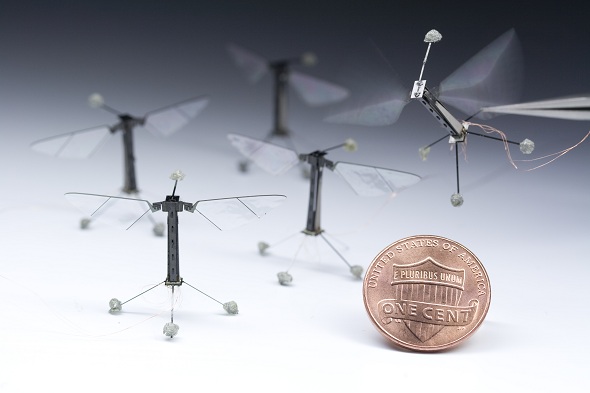 Group of researchers at the Wyss Institute, Harvard’s School of Engineering and Applied Sciences (SEAS) and Northeastern University, is currently developing ‘RoboBee’ a miniature robotic bee which will be able to mimic the behavior of a honeybee. The group aims to drive progresses in miniature robotics by creating dexterous robotic insects.

The miniature robotic bee’s fundamental application would be autonomous pollination in a field of crops. The RoboBees would also be equipped for some diverse assignments including search and rescue, for example, in the repercussions of a natural disaster and hazardous environment exploration. Researchers at Harvard have created minuscule robots that can fly and are intended to pollinate crops exactly as the endangered bees do.

RoboBees are described as “80-milligram, insect-scale, flapping-wing robots”, as indicated by the journal Science. It mentions that they’re basically honeybees measured robots that drift when fastened to a force supply. In spite of the fact that these robots appeared a year ago, they’ve been revised lately and are presently more capable than before.

Bumble bees are essential to US farming and contribute over $15 billion in value every year. It’s not clear why honeybees are vanishing over the globe, however researchers have tossed around an expression called Colony Collapse Disorder and ascribed the emergency to a combo of factors described before.

Harvard analysts trust that RoboBees will one day artificially pollinate crops for the honeybees, subsequently helping the pollination business and dodging extra monetary effect on the US agricultural sector. Despite the fact that it may take an additional 20 years of improvement for the change to take place, Kevin Ma, a mechanical specialist at Harvard, said that the team of scientists is “on the eve of the next big advancement.”

More particularly, the RoboBees are now capable of carrying more weight. This is viewed as a noteworthy leap forward, as it was at one time difficult to stick all the vital hardware needed into a little robot and still keep it lightweight enough to fly. Researchers are attempting to make the bots fly on their own and communicate with one another to finish tasks. Harvard researchers don’t see RoboBees as permanent honeybee replacements. On the project website, they stated that robotic pollination isn’t a suitable long-term solution and portrayed the innovation as a “stop-gap measure while a solution to CCD is implemented”.

Anna Domanska
Anna Domanska is an Industry Leaders Magazine author possessing wide-range of knowledge for Business News. She is an avid reader and writer of Business and CEO Magazines and a rigorous follower of Business Leaders.
« U.S. Warns Retailers On The New ‘Backoff’ Malware Striking Sales Systems
Tesla, Panasonic team up for battery Gigafactory »
Leave a Comment
Close