Ritter, which supposedly started making chocolate in square form so it’d fit into jacket pockets easier, registered the shape with the German patent office, and now Milka brand owners Mondelēz have lost a case for dibs on the square shape.

The German chocolate maker, Ritter Sport, has won a case against Milka, the Swiss chocolate manufacturer after Germany‘s highest court said that the distinct square configuration of the confectionery was exclusive to Ritter Sport.

The court order forbids other “top-brand” chocolate makers from manufacturing and marketing chocolate in a square shape.

The case has been ongoing for the past 10 years. American confectionery brand Mondelēz – the third-largest confectionery company in the world after Mars and Ferrero – wanted Ritter Sport‘s monopoly on quadratic chocolate bars to end, but it will not be happening in Germany at least. Mondelez owns the Milka brand.

Ritter Sport sued Mondelez—known as Krafts Foods then— in 2010 for selling a “double chocolate bar” with a similar quadratic design. Mondelez won an injunction in 2016, but it was again overturned in 2017 by a higher court.

Mondelēz’s argument was that the square-shaped chocolate bars are a technical function rather than a trademark. Under European legislation, a three-dimensional form cannot be trademarked if it is an “essential functional characteristic” of the product.

The German Patent and Trademark Office ruled that the design was part of Ritter‘s character and history, in addition to being functional.

And in 2020, the highest court has also ruled in favor of Ritter Sports. The judges said that “consumers considered the square nature of the chocolate bar as an indication of both where the chocolate came from and its quality.” They also say that there was no artistic reason why Milka needed to make a square bar. 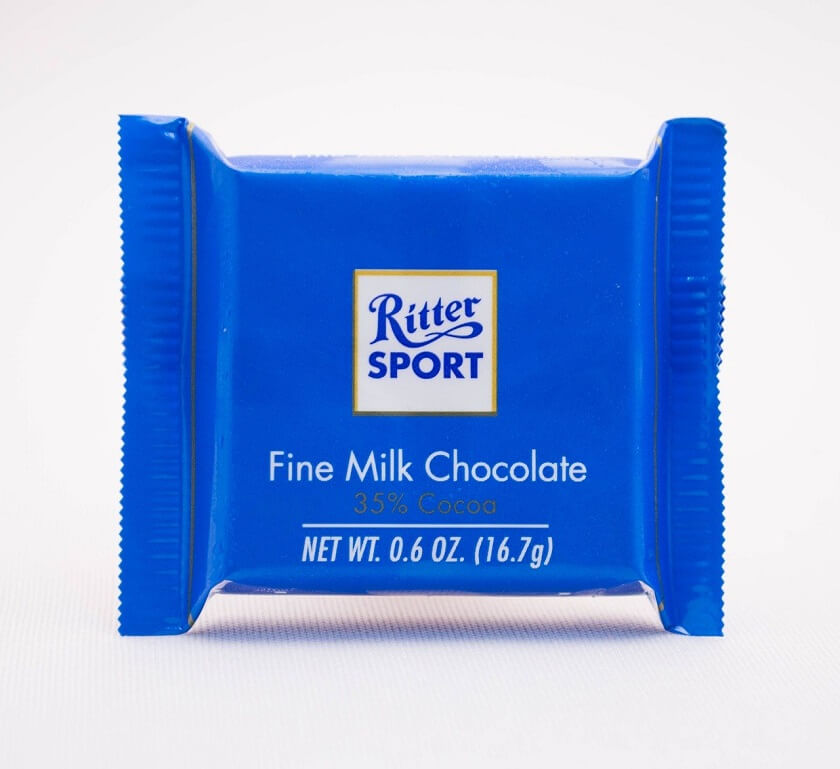 Ritter Sport’s thick, square-shaped bar design dates back to 1932, apparently suggested by Clara Ritter, the co-founder of the company with her husband, Alfred. She is recorded as saying, ”Let’s make a chocolate that fits into any sports jacket pocket without breaking and has the same weight as the normal bar.”
Later all non-square merchandise, packaging was removed from the range to fit in with its image. In 1970, the company launched its first television advert with the slogan “Quadratisch. Praktisch. Gut“, which translates to: “Quality. Chocolate. Squared”.

The family company registered the shape with the German patent and trademark office in 1993.

Mondelēz, the third-largest chocolate company, has an annual revenue of around €26 billion, and exports to over 150 countries across the globe. The company website says that over 150,000 Milka products are sold world-wide each hour.

Ritter Sport exports its chocolate to 100 countries and generates over €480 million in turnover per year.

A similar case fought by Nestles in 2018 saw it losing its exclusive right to the tearable design of its KitKat brand. The European Court of Justice ruled in favor of Mondelez owned chocolate bar Kvikk Lunsj, saying that the shape of the chocolate bar is not distinctive enough to amount to a trademark.

Ritter, which supposedly started making chocolate in the square form so it’d fit into jacket pockets easier, registered the shape with the German patent office, and now Milka brand owners Mondelēz have lost a case for dibs on the square shape.

Royal Dutch Shell commences share buybacks before the end of this year while reducing its first quarter dividend to 16 cents per share, a 66% cut.
12 mins ago