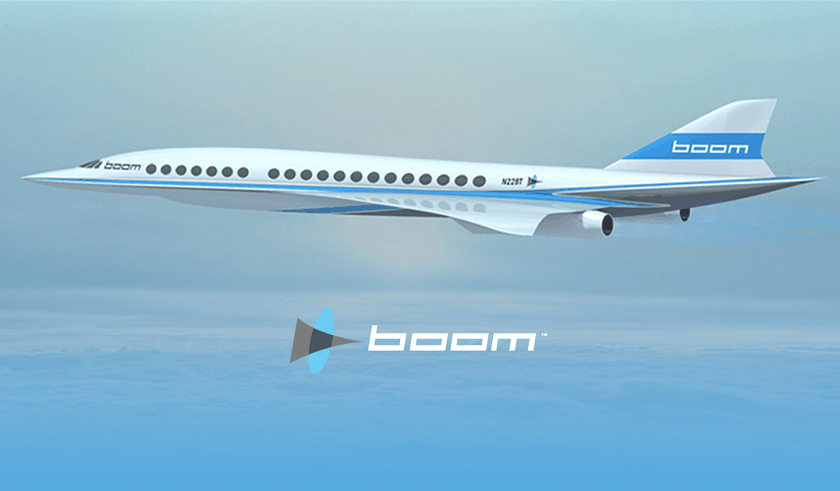 A company called Boom Technology Inc. has unveiled plans for a supersonic airplane of the same name, which is being developed as a replacement for Concorde.

Boom airplanes are predicted to fly 2.6 times faster than any other aircraft (and faster than Concorde Mach 2.0), and hit speeds of Mach 2.2 or 1,451 miles per hour (Concorde’s top speed was 1,350 miles per hour).

Each supersonic airplane will have 40 seats in two rows on either side of the aisle, and will allow passengers to fly across the Atlantic in under three hours and thirty minutes. A round-trip would run at about $5,000, which is roughly the same cost as business class.

“We’re making a supersonic aircraft affordable for business travel. Our ultimate goal is routine supersonic flight for everyone,” states Boom. “Today, international travel means jetlag and days of lost productivity and family time. But imagine leaving New York in the morning, making afternoon meetings in London, and being home to tuck your kids into bed.”

The concept may seem a little too far-fetched to critics, however, Boom founder and chief executive Blake Scholl, who is a licensed pilot, assured that the plane will be developed using existing technologies. It will be made of carbon-fibre composites, propulsion systems, and airframe materials that will allow the aircraft to be the fastest plane in the world.

The airplane is currently in the prototyping phase, however, the team is all set to fly a test aircraft in late 2017, following speeding records near Edwards Air Force Base in California.

Boom recently received backing from Virgin chief, Richard Branson, and is developing commercial space flights. The Spaceship Company, Virgin Galactic’s manufacturing organization has committed to provide development services for Boom and has also signed an agreement to buy 10 of the planes in hopes of introducing shorter passenger flights between London and New York.

In addition, Boom has also signed a letter of intent with a major European carrier, which is set to buy $2 billion worth of airplanes.

Blake Scholl believes the supersonic airplane will be a commercial success because flights will be cheaper (compared to the Concorde) allowing people to commute from London to New York in 3.5 hours. The 100 seat Concorde was economically unviable as it was heftier in size as well as ticket price. Moreover, it’s maintenance cost far exceeded the expenses of other commercial aircraft, and a round-trip ticket would cost $20,000.

Boom isn’t the first to design a replacement to Concorde. Earlier this year, NASA in collaboration with Lockheed Martin unveiled a conceptual design for a supersonic plane that would be much quieter. Airbus also appears to have taken steps in supersonic development by filing a patent application.

2016 marks the 40th anniversary of the first Concorde flight. It last flew in 2003 from Heathrow before it was mothballed for commercial reasons by Air France and British Airways.

Anna Domanska
Anna Domanska is an Industry Leaders Magazine author possessing wide-range of knowledge for Business News. She is an avid reader and writer of Business and CEO Magazines and a rigorous follower of Business Leaders.
« Facebook Bought its Biggest Threats, Is Snapchat Next?
On Safari in South Africa »
Leave a Comment
Close