Rex Tillerson could be a promising influence on U.S. Energy Sector

President-elect Donald Trump nominated Rex Tillerson, the 64-year-old CEO of ExxonMobil to be the secretary of state. Many believe that picking a veteran chief executive, who has had a cozy-relationship with Vladimir Putin, the president of Russia, could complicate affairs. Unlike top diplomats, Tillerson has no experience in the public sector. However, there are several reasons why the successful dealmaker would make an effective secretary of state.

The Texan oilman, Rex Tillerson, has guided Exxon’s entry into the politically embroiled Russia after the breakup of the Soviet Union. Exxon Mobile has since various projects afoot in Russia, all of which are under American sanctions. There have been a few exceptions, such as a deal with the Russian state oil company to drill in Siberia that could be worth tens of billions of dollars. 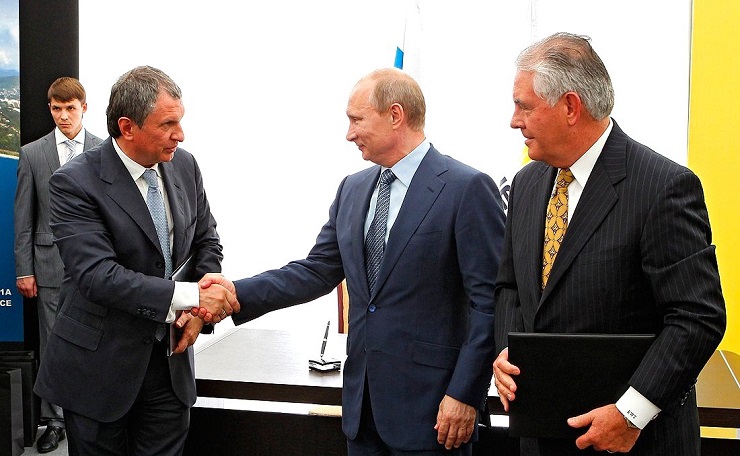 Vladimir Putin oversaw the signing of an agreement between President and Management Board Chairman of Rosneft Igor Sechin (left) and President and Chairman of ExxonMobil Rex Tillerson on joint development of difficult-to-access reserves in western Siberia.

Rex Tillerson’s Appointment a Win for US Energy Sector?

In the book, “Private Empire: ExxonMobile and American Power,” Pulitzer prize-winning journalist Steve Coll points to Tillerson’s CEO appointment in 2006 as a direct result of his Russian ties.

Environmentalists view this association negatively. And yet, at the same time, view Iowa governor Terry Brandstad’s deep ties to Chinese president Xi Jinping as a positive aspect of his appointment as Ambassador to China. The fundamental difference here is that Brandstad built his relationship with China as a representative of Iowa while Rex Tillerson built his relationship with Russia as well as other countries as a representative of Exxon.

Rather, Tillerson’s experience in the energy industry is a distinct advantage. He’s an accomplished negotiator and will know how to pressure China to adopt fair trade policies.

Connection To Russia A Point Of Concern

Under Tillerson’s leadership, we are more likely put forth a business-based approach to float the U.S. energy sector. The same goes with U.S. – Russia energy relationship. The White House will make a significant shift towards transactional policy. This, and also build a mutually beneficial relationship, and de-escalate tensions rising in Ukraine and Syria.

Russia has in the past, leveraged its massive energy sector as a tool of negotiating foreign policy against the U.S., Europe and CIS states. If Tillerson truly understands Putin’s goals in Russia, he could use it to a mutual advantage. However, a single misstep could likely backfire, allowing Russia to make more gains, or even create conflict. But, only time can tell whether or not Tillerson’s decorated friendship with Russia will work in the favor of the U.S. interests.

All that aside, Tillerson’s business and negotiation skills could mean the U.S. will finally lift the ban off the Keystone XL pipeline. Ultimately, this move will lead to the Canadian oil sands delivering more oil to American refineries. Similarly, he might try to smooth relations with Mexico City, giving U.S. the access to Mexico’s growing gas export market.

Lastly, Rex Tillerson could encourage President-elect Donald Trump to support the international climate accord negotiated in Paris in December 2015. This, but with greater emphasis on the benefits of natural oil and gas and pioneering ways to bury carbon waste. All this, is a development that only Tillerson has the power to steer.

Anna Domanska
Anna Domanska is an Industry Leaders Magazine author possessing wide-range of knowledge for Business News. She is an avid reader and writer of Business and CEO Magazines and a rigorous follower of Business Leaders.
« First Super Nintendo World to be launched in Universal Studios Japan by 2020
James Dyson: The Steve Jobs of Industrial Design »
Leave a Comment
Close