Flow hive has been the best technology to keep bees for quite some time now. And the technology has undergone many modifications to provide the safest and easiest means of harvesting honey, mostly with minimal consideration of the bee colonies. A family from Australia seems to have found a model of flow hive that has changed everything about harvesting honey for good including taking care of bee populations.

Beekeepers always look up to the harvest time to reap rewards from their beehive, but the process of harvesting honey from most contemporary flow hive can be very challenging. Bees won’t let anyone get into their food store without putting up a good fight.And the hassle seems too much to run at home or backyard garden; wearing a protective suit, using a smoker to deter bees from attacks, proper placement of bee escape, use of a hot electric knife and removing dead bees from the wax. Many beekeepers get discouraged after harvesting their first batch.And this paints honey harvesting as the most tedious role in beekeeping while it’s still the major discouraging factor until the introduction of a flow hive model from Anderson’s Family.

Having kept bees for many generations, Cedar Anderson thought “there has to be a better way” to make harvests without disturbing the bees after an unsuccessful harvest due to angry bees. He walked up to his father, Stuart Anderson and proposed building a beehive that can support easy harvest. They took up the “task of inventing the beekeeper’s dream,” a flow frame that does not disturb the bees during the harvests.With no smoker, no escape screen nor dead bees. It actually took a decade to arrive at and the project which just made its second launch for crowdfunding. 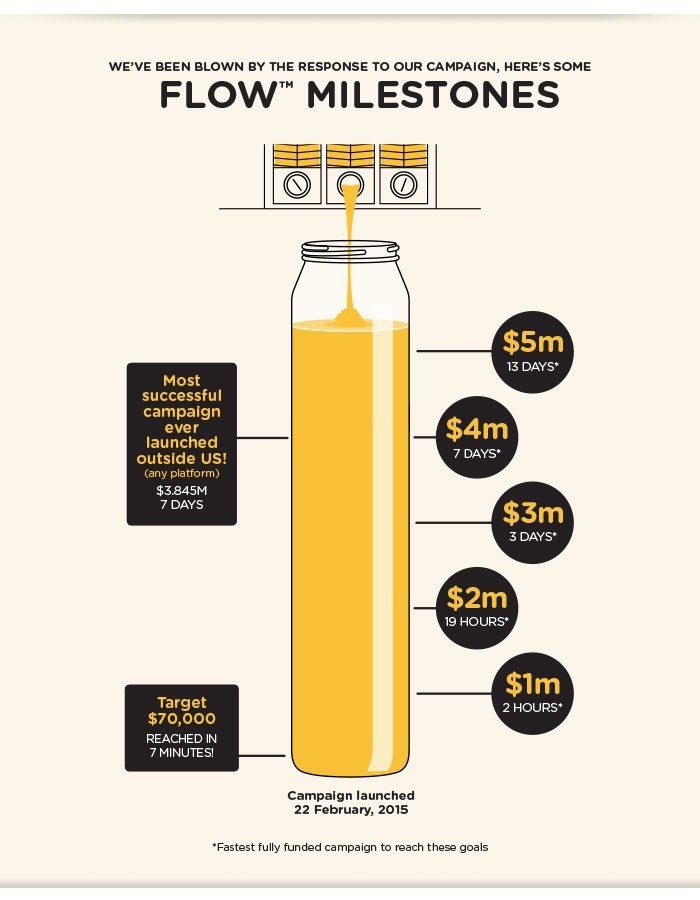 The Flow hive is produced with partially built honeycomb cells which the bees are to complete using their wax. The bees complete the cells and fill them with honey, capping them as usual. When the flow tap is turned, it causes the cells to separate vertically to form a channel inside the comb, through which the honey will flow down swiftly out of the hive. A harvesting shelf carries the containers for collecting the honey, and the bees remain in the hive without any disturbance on the comb surface. After draining the honey in the hive, the flow tap is turned back to its upper position to return the comb into its previous position, allowing the bees to refill the comb after chewing off the wax cap.

The project raised $12.2 million against a $70,000 target in its 2015 crowdfunding campaign. To celebrate the 3rd anniversary of the record-breaking technology, Cedar and Stuart Anderson developed a newer version, Flow Hive 2, which is delivered with extra features and in compliance with customer’s feedback. Flow Hive 2 was launched on March 5 as a second phase of the project’s crowdfunding campaign, with approximately 400 units available.

The Flow Hive currently represents the most advanced apiary any family can use to harvest honey effortlessly from their backyard. It is very user-friendly and has taken away all the challenges in harvesting honey while also playing a role in the sustainability of bee colonies.