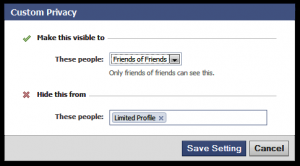 What’s the latest in the raging Goldman-Sachs/Facebook love affair that has been unfolding over the last two weeks? First, Goldman Sachs invested $450 million in Facebook and followed this up by approaching its wealthiest clients to be part of a fund that would own shares in the fastest-growing social networking company, Goldman Sachs has now announced its decision to not offer shares in Facebook to its U.S. clients, according to reports by the Wall Street Journal.

Citing “intense media attention,” as the reason for this decision, Goldman Sachs said in a statement that they have “concluded the level of media attention might not be consistent with the proper completion of a U.S. private placement under U.S. law.”

While the deal will reportedly still be offered to the bank’s offshore clients, the firm withdrew the opportunity from clients in the United States on Monday because of worries that the deal could run afoul of securities regulations. Reports however specifically indicate that the exclusion of U.S. investors was not required or requested by any government agency.

Considered a serious embarrassment for Goldman, which had marketed the investment to its wealthiest clients, including corporate magnates and directors of the nation’s largest companies, the offering was supposed to have been a triumph for the firm, which is trying to move past run-ins with regulators, including a $550 million settlement with the Securities and Exchange Commission last summer over a complex mortgage investment.

But the way the Facebook plan has unfolded, it is now likely to raise new questions about whether Goldman tried to push regulatory boundaries once again.

Goldman made its decision after the investment plan drew scrutiny. The S.E.C. had opened an inquiry into the structure of the offering and whether it violated the law because of widespread news coverage. Federal and state regulations prohibit what is known as “general solicitation and advertising” in private offerings. Firms like Goldman seeking to raise money cannot take action that resembles public promotion of the offering, like buying ads or communicating with news outlets.

The intention behind the unique offering made by GS was two-fold : Goldman would get to offer clients a hot investment opportunity, while Facebook would be able to remain a private company.

This latest announcement by GS is representative of the growing trend of a distinct blurring of public regulated markets and hands-off private markets, something the Securities and Exchange Commission seems to be growing increasingly concerned about. Given this, the SEC would need to determine if it can build an enforcement case cracking down on investors and companies potentially skirting the rules on the books, or whether it needs to clarify those rules itself.

Under U.S. securities law, if a company’s private shares are held by more than 500 holders of record, the company is required to register with the SEC and file public disclosure statements. But the rules generally define the term “record holder” as the name displayed on the company’s stock record, and not the beneficial owner of the stock. That means firms like Goldman Sachs can potentially skirt public disclosure rules through the use of a special investment vehicle. These funds can offer numerous investors the opportunity to buy stock, but the shares are all listed in the name of Goldman Sachs and only count as one shareholder of record.

Some securities lawyers say the SEC could choose to intervene if it concludes Facebook intends to skirt disclosure rules.

“It would not strike me as unusual for the SEC to be thinking about it and having to come to grips with it, because of the public notoriety around this transaction,” said Stanley Keller, a lawyer at Edwards Angell Palmer & Dodge in Boston. “When you combine this deal with the secondary market activity taking place, it makes it more problematic for Facebook avoiding crossing over the 500-holder threshold.”

Google, another fast-growing Internet company, had also avoided an IPO until trading activity in employee options drew the scrutiny of the SEC. Google went public in 2004.

How Regulatory can the SEC really be?

While several securities law experts note the Facebook fund, if unchallenged, could have major ramifications for other private companies and for Wall Street, they have also indicated in reports that if companies are closely following all the rules for offering private shares, there may not be much the SEC can do on the enforcement side.

“Assuming they took the steps that were necessary to comply with existing rules and regulations, absent fraud or other extenuating circumstances, even though the SEC may not like it, there’s probably not much they can do,” said Brian Breheny, a former SEC deputy director of corporation finance who is now a partner at law firm Skadden Arps.

This is not the first time the SEC has been faced with the issue of whether it needs to update its registration rules for over-the-counter equities. In 2003, some investors urged the SEC to count beneficial owners amid concerns that companies were intentionally deregistering their securities to avoid disclosure rules.

Lawyer Stephen Nelson, who represented those investors, said he thinks many of those same issues are still relevant. He said the recent financial crisis underlined that regulators need as much information as possible to effectively police markets.

“When you have entities out there like Facebook, unregistered and not providing information to the SEC about their activities, the more of that kind of stuff that goes on, the dumber your regulators get and the worse their decision-making gets,” he said. “And that scares me.”