Researchers turn algae into crude oil in less than an hour 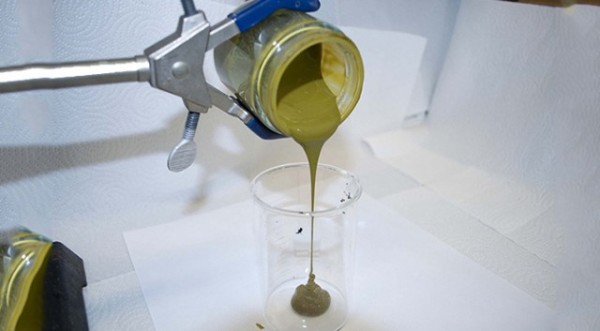 Algae about to be turned into oil

In the PNNL process, a slurry of wet algae is discharged into the front end of a chemical reactor exposing it to very high pressure, 3,000 pounds per square inch, and water heated to 660 degrees Fahrenheit. These forces split the algae up and turn it into a mixture of hydrocarbons similar to light crude oil, along with clean water, fuel gas and nutrients that can be recycled to grow more algae. According to the team’s recent experiments about 53 percent of the algae will end up converted into biocrude.

“It’s a bit like using a pressure cooker, only the pressures and temperatures we use are much higher,” scientist and lead researcher Douglas Elliott said in a statement. “In a sense, we are duplicating the process in the Earth that converted algae into oil over the course of millions of years. We’re just doing it much, much faster.”

While algae have long been regarded as a potential source of biofuel, and many companies have created algae-based fuels on a research scale, the algae biofuel is projected to be highly priced. The PNNL technology tackles algae’s energy potential effectively and includes a number of methods to abate the cost of generating algae fuel.

The benefit of algae biofuel is that its source multiplies rapidly. But till date there is more focus on breeding strains that produce high levels of fatty acids, which are comparatively easy to convert into fuel. However, these fatty algae strains don’t grow as rapidly as normal algae.

“An alternative algae utilization strategy is to grow algae in a wild and/or mixed culture at optimum growth conditions in order to maximize total biomass without consideration of fatty acid production, Elliott and his colleagues wrote in the journal Algal Research in October.

However, there are still some major impediments that algae-based fuels will have to overcome before they can be a suitable alternative. A recent survey conducted by environmental policy researchers from Imperial College London found that most algae cultivation methods exhaust more energy than they generate.

“Cost is the big roadblock for algae-based fuel,” Elliott said. “We believe that the process we’ve created will help make algae biofuels much more economical.”

Anna Domanska
Anna Domanska is an Industry Leaders Magazine author possessing wide-range of knowledge for Business News. She is an avid reader and writer of Business and CEO Magazines and a rigorous follower of Business Leaders.
« Apple Inc. Repudiates Claims About Working With NSA For Access To iPhone Data
Tobacco taxes could prevent 200 million deaths worldwide »
Leave a Comment
Close

The running lights, too, have a classier, sporty design. Cadillac aptly captioned the video “Power has a sound – and it’s a roar.”
21 hours ago

The U.S. is fast approaching the end of a “superbubble” spanning across real estate, stocks, bonds, commodities, as per iconic investment guru, Jeremy Grantham.
23 hours ago