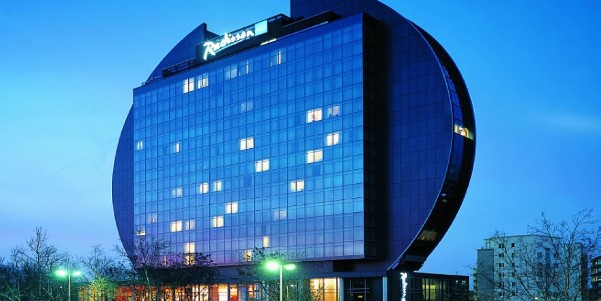 Previously known as Radisson SAS, Radisson Blu hotels are mainly found outside the United States, in Europe, Middle East, and Africa (EMEA). These properties are operated by Carlson Rezidor Hotel Group and have their roots in the branding merger of SAS International Hotels (SIH) with Radisson brand in 1994, which resulted in the creation of Radisson SAS. The success of the new Hotel Group was outstanding and by 2000 it opened its hundredth hotel. By 2002, more than 150 properties were operated by Radisson SAS in more than 40 countries throughout EMEA.

In 2009, after the withdrawal of Scandinavian Airlines System (SAS), the major shareholder in Carlson Rezidor Hotel Group, the name Radisson SAS was changed to Radisson Blu. Rezidor’s Executive Vice President of Brands Gordon Mckinnon explained that the name was the product of Rezidor’s research to find a fresh visual differentiator that replaced the familiar SAS ‘blue box.’ “The name Blu started life as the project’s working title. But it soon became apparent that it was actually the most natural of choices. It’s simple, it’s short, it’s relevant and we have applied it in a way that adds certain modernity to the identity without taking it too far,” he said. “Most importantly, it also promotes our specific brand heritage by preserving the graphic ‘blue box’ which has become the recognized symbol of the distinctive characteristics of the Radisson brand in Europe, the Middle East and Africa. Radisson Blu preserves the continuity of our unique brand, while taking it that one essential step forward to more accurately represent its true position and future ambitions.”

In 2010, after the merger of the Radisson Blu and Radisson Edwardian hotels, Radisson Blu became officially the largest hotel chain in Europe with 170 hotels and 38,079 rooms. Having no presence in the United States before, the first Radisson Blu was opened in November 2011 in downtown Chicago. One more property was opened in 2013: the Radisson Blu Mall of America in Bloomington, Minnesota. This building is connected, as the name suggests, to the Mall of America. The third and last operating hotel at the moment is the Radisson Blu Warwick Hotel Philadelphia, which is no more than the renovation of the Radisson Plaza-Warwick Hotel Philadelphia that was completed in late summer 2013. A fourth hotel is planned to be opened in Minneapolis, Minnesota soon this year. The project consists on the remodeling and expanding of Radisson Plaza Hotel.

Among the key and outstanding characteristics of Radisson Blu hotels, one can find their philosophy: the Yes I Can! Philosophy. Radisson staff is meant to always be positive, smiling, and professional in their conduct and approach; which reflects the brand’s focus on wellbeing and satisfaction of each individual guest. The Hotel Group describes itself as an imaginative and understanding company, which is truly empathetic to the needs of the contemporary traveler.

In addition, Radisson is found in a great variety of destinations, in places where their target guests need hospitality services the most: near city centers, airports, and holiday destinations. The brand’s most important aim is to provide guests outstanding levels of service and comfort, which are delivered with the highest style.

An eye for details

Following its Yes I Can! Philosophy, Radisson Blu is continuously evolving and looking for new partnerships which allow it to offer the highest quality of services to its guests. Therefore, the hotel chain recently announced a new guest amenity line called In Transit that was developed and created by health expert Kathy Phillips, who is also Creative Director at Conde Nash Asia. The set of toiletries pays homage to the versatile life of the conscious world-traveler, who seeks for a relaxed, unique experience enhanced by beauty essentials with therapeutic effects and delicate fragrances.

The In Transit set of products includes a reviving shampoo, shower gel, and rebalancing conditioner, along with a shower cap and a vanity kit. Selected hotels will also provide additional items like a healing hand cream and bath salts. The line features an exclusive fragrance, containing revitalizing effects of rosemary and green mandarin. Every product is conceived to help ease the demands of contemporary life, which involves pressures, irregular sleep patterns, and early mornings. Phillips described this award-winning skincare line as “an invaluable group of multi-tasking essentials that are versatile, hard-working, relievable, luxurious, and natural.”

An image worth more than a thousand words

Radisson Blu creates iconic buildings featuring individual unique interiors and exciting ambiance in order to offer a holistic hospitality experience. The brand works with the world’s top architects and designers to go beyond the accepted boundaries and create remarkable and memorable new landmark properties.  The following are some of the most relevant examples of Radisson Blu hotels’ design and architecture.

Frankfurt’s architecture is characterized by its many contemporary structural delights. There are more than twelve skyscrapers across the city’s skyline along with several public parks. The list of magnificent Frankfurt buildings includes the energy efficient WFK Westarkade Conference Centre, the outstanding MyZeil Shopping Centre, and the Commerzbank headquarters featuring a tower that stands 259 meters and 53 stories high.

Frankfurt’s Radisson Blu Hotel is another architectural jewel in the city’scollection, for it is the most unique hotel in the city and stands as the only round hotel in Europe. The one of a kind building, featuring the whole exterior made out of glass, was conceived and designed by architect John Seiffert, who specializes in hotel and resort’s design. The interiors include 428 bedrooms and suites which have been designed by Mattheo Thun in four different styles: fashion, fresh, chic, and home. Furthermore, he was also responsible for the design of the conference and event facilities, public areas, and spa. The lounge and dining areas of the building were designed by Adam Tihany and are inspired on the four elements: earth, wind, water, and fire.

Now known as a majestic landmark on the city’s skyline, the newly restored 5 star Radisson Royal Hotel in Moscow promises its guests a luxurious stay in a building stepped in history. Located in the heart of Moscow, on the Moskva River—within walking distance of remarkable attractions and state properties—the hotel was commissioned by Stalin and built between 1949 and 1957. It is an example of the Soviet neo-classicism architectural style.

The hotel accommodates guests in the second-tallest of the Seven Sister buildings in the city. Visitors can look forward to magnificently elegant guest rooms, broad gourmet dining options, and state-of-the-art fitness and spa facilities. Being 206 meters high, the Radisson Royal Hotel was the largest European hotel of its time and nowadays boasts several impressive ceiling frescoes and murals as well as an extensive original art collection.

This exquisite accommodation on the Cape Verde Peninsula allows its guests to explore freely the cultural riches of Senegal. Situated in the Tony Fann Corniche neighborhood—just 6 km away from the city centre—this hotel features modern, stylish architecture. Visitors can enjoy the exquisite fusion and seafood cuisine at one of the two Radisson’s restaurants or have a refreshing cocktail by the large 750-square-meter infinity pool. This hotel was awarded the International Golden Eagle Award for Prestige & Quality and the Best New hotel investment for the Tourism Business council of South Africa acknowledgment, both in 2010.

Rising above Chicago’s unique lakeshore, Radisson Blu Hotel Aqua has become a landmark itself. This exceptionally designed skyscraper features breathtaking views of the historic Lake Michigan, the surrounding cityscape, and the Millennium Park. The building was designed by the renowned architect Jeanne Gang and distinguishes itself for its special features that include on-site parking and easy access to Windy City landmarks like the Magnificent Mile. Guests can embark on a boat tour along the Chicago River, catch a show in the Loop theater district, or find themselves just a short ride from Union Station.

Renovation as a key to success

Through their Yes I Can! Philosophy and with more than 230 hotels across the world and 51 projects in progress, Carlson Rezidor Hotel Group and Radisson Blu’s success is best owed to their unique approach and continuous innovation that mirror in their architecture, design, and business.