Quiet, Cool and an Electric Hit: BMW i3 One of the Final Seven Car of the Year

The World’s Most Advanced Supercar is here! Undeniably a Masterpiece the BMW i8 Hybrid Supercar comes straight from the future!

BMW has officially announced its line-up of cars to the upcoming Geneva Car Show 2014 in March. There will be a selection of world premiers for the newest products from BMW. The BMW 2-Series Active Tourer, BMW 4-Series Gran Coupe, brand new BMW 2- Series Coupe range, BMW i3 and many more. 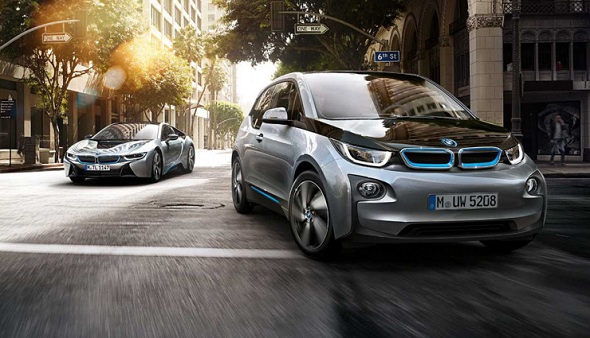 Currently there is a six-month waiting list due to its popularity. The company has received around 11,000 orders out of which 1,200 of the orders are pre-orders made in the U.S.

The most distinctive entry of all is the BMW i3, which is one of the two electric vehicles making it into the final seven for Car of the Year honors. Ever since its first teaser, reviewers have been debating whether the i3 adds up as one of BMW’s Ultimate Driving Machines. The i3 is BMW’s first fully electric car unlike any other BMW. The i3 is already seen as a hit amongst early adopters and ecology-minded drivers who want low running costs and are into plug-in electric cars.

One of the most prominent spot of evaluations by critics seems to be its size and style. The i3 sports a mix of aluminum, thermoplastic and carbon fiber body made at a fully sustainable plant in Washington.  The concurrent AC electric motor and transmission are mounted at the rear, reducing the amount of cabling required.

Its suspension and wheels are made of forged aluminum with drive shafts which are hollow. The screws and bolts are made of aluminum too rather than the traditional steel.

Its 22kWh battery pack is under the floor with eight modules, each containing 12 individual cells producing the equivalent of 168bhp. They are encased in aluminum and are protected by chassis rails. The passenger cell is made of carbon fiber – which is light, strong, and usually preserves low-volume and extremely costly high-performances cars.

The i3 has an instant and impressive acceleration. It can go up to 80 miles on pure electric power and go 0-62 in 7.2 seconds using 170 horsepower and 184 lb-ft of torque. BMW also offers a range-extending gas engines. To top it all, MW has a sophisticated thermal management system.

Currently there is a six-month waiting list due to its popularity. The company has received around 11,000 orders out of which 1,200 of the orders are pre-orders made in the U.S.

The  i3 suggested starting price will be similar to a typical 3-Series, that doesn’t include any government tax breaks. BWM believes that luxury consumers who go for high style and performance will go for the much sexier and pricier i8 supercar which is listed at $135,000.

Anna Domanska
Anna Domanska is an Industry Leaders Magazine author possessing wide-range of knowledge for Business News. She is an avid reader and writer of Business and CEO Magazines and a rigorous follower of Business Leaders.
« World’s Biggest Solar thermal power plant goes online in California desert
Google Project Tango: A Smartphone That Scans the World in 3D »
Leave a Comment
Close