How do we visualize our future city to be like? Of course, the obvious answer is that the future city will be a smart one. But what does this smart comprise of?

Sidewalk Labs, Alphabet’s urban city technology subsidiary and a tri-Government organization Waterfront Toronto have jointly presented a blueprint of an official City of the Future, Quayside. The city, in turn, is a part of a bigger project, Sidewalk Toronto located along Toronto’s Eastern waterfront.

Sidewalk Labs proposed a fresh urban design, innovative infrastructure and green building technologies to construct 3000 million square feet area out of 12 acres of Quayside. The revelation happened during the third meeting in a series of five public roundtable discussions which was held on August 14, 2018.

Google’s sister company is also soliciting reviews from Torontonians at public talks and public roundtable discussions to co-create the Sidewalk Toronto. The project committee has eventually scheduled to present the final “Master Innovation and Development Plan (MIDP)” in 2019 spring after going through several government bodies’ scrutiny.

Unveiled in October 2017, Sidewalk Toronto is re-envisioning cities to improve the quality of life. It is aimed to address several urban city problems such as affordable housing, vehicular congestion and road safety, energy use, and environmental issues. Quayside is supposed to serve as the first testing construction site for the project.

From an advanced urban planning perspective, Quayside’s design is based on four principles – sustainability, affordability, mobility and economic opportunity. Sidewalk Labs is considering the use of tall timber building technologies, digital electricity, and modular roads to build the city from scratch.

This indicates that there lies a spectrum of possibilities in the underdeveloped Quayside region. “We don’t have to respect any existing uses because it’s almost a Greenfield,” said Rohit Aggarwala, Head of Urban Systems, Sidewalk Labs.

Situated at Parliament Slip, southeast of Downtown Toronto, Quayside is poised for significant growth because of favorable geography. The plan for the tabula rasa site is directed towards the public realm. 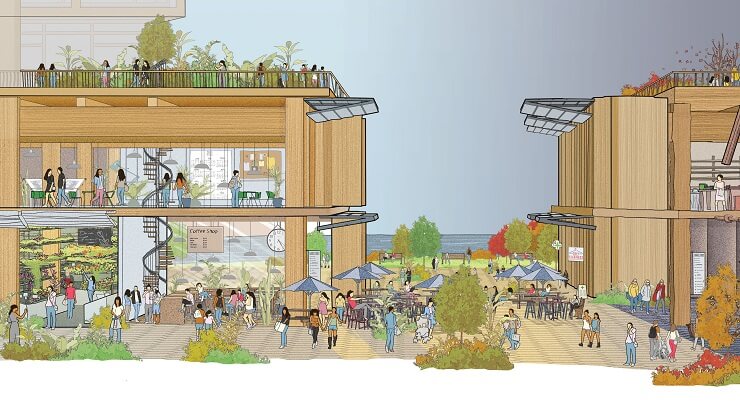 Canada is a leading supplier of certified forests that can be sustainably grown. It can grow a number of trees equivalent to cover entire Quayside site within a hundred minutes. Leveraging on that capability, the nation is an early adopter of tall timber technology for building schools, residential and commercial spaces.

Mass timber construction at Quayside will include two types of engineered woods – glue-laminated timber (glulam), and cross-laminated timber (CLT). These woods feature higher strength and stability than standard woods and even steel. Furthermore, they can be crafted to particular measurements reducing material waste.

Besides sustainability, the extensive use of local wood would also meet one of the other objectives of Sidewalk Toronto project – economic prosperity.

The mass use of timber in buildings will eventually result in cost saving. It would further encourage Canada’s leading timber industry to gain a global expertise in tall timber technology also.

In spite of massive benefits, timber technology has several challenges upfront. According to the local building code, the timber buildings at Quayside could be erected up to 6 storeys with performance-based approvals for taller buildings, on top of the timber construction limited up to 30 storeys.

It is reported that by 2021, the government will sanction approval up to 21 floors with performance-based approvals for taller buildings. The Sidewalk Toronto committee proposed 19 storeys taller buildings with 42 and 50-story constructions in the future.

The one industry which is pioneering in Green initiatives is automobile – electric vehicles, autonomous cars, public transport system, hydrogen fuel cell cars, bike sharing, flying taxis, banned diesel cars and so on. The automakers, tech giants and Government authorities are rather taking radical steps and that too at a faster pace to limit greenhouse gas emission.

To match the basic necessities of the future transit system, Quayside design incorporates modular pavements made of high-tech hexagonal concrete slabs. These pre-casted slabs facilitate faster maintenance and replacement, plus allow adaptation as per the flow of traffic. In fact, one of the five suggested street plans of Sidewalk Toronto includes wider roads for pedestrians than for cars, public transport and parking.

These slabs will be integrated with the conductive system to melt ice and snow during winters. The embedded LED lights in them will illuminate at the nighttime and reflect different color to specify lanes for cars, bikes and pedestrians.

At the peak of public realm, Sidewalk Labs’ much focus is making ample community space encouraging people to interact without phones. Moving ahead on this guiding thought, the design team took inspiration from century-old architecture concept called ‘Stoa’. It is a covered public walkway planned specifically for informal gatherings or setting up markets.

In the case of Sidewalk Toronto’s pioneer site, a modern Stoa is a kind of adaptable and re-usable bottom floor spaces available under low-rise buildings. It will be made of 6m long wooden columns sized 12m*12m that will facilitate to install moveable walls and flexible wall panels.

This modularity design element propelled into the wooden constructions shall support re-use of single space for multiple purposes such as for retails, cafes, offices, playgrounds, and library.

Such a substructure system is imperative in light of windy climatic conditions prominent in the coastal vicinity. Sidewalk Labs’ Director of Buildings Innovation, Karim Khalifa dubbed this adaptability building feature as a “radical mixed use.”

The Sidewalk Labs also looked for an opportunity to pull the water body into the neighborhood layout for enjoying certain water adventurous activities.

At the same time, Alphabet’s company intends to add a flexible architectural element to the future city so that the outdoor area remains usable throughout the year. It has planned to develop “waterproof and windproof building overcoat” in order to face the challenging weather conditions. These overcoats are transparent, lightweight, moveable screens that would cover the building to shield them from wind, rain, snowfall and harsh sun.

“Waterfront streets will be remade as ‘places’ with distinct identities. Streets will act as lively urban connections as well as traffic arteries. The needs of motorists will be balanced with efficient transit service and high-quality amenities for pedestrians and cyclists,” mentioned in the Central Waterfront Secondary Plan.

The released design document mentioned that such a technology will ultimately result in doubling up the outside area usage.

To date, the high-tech Sidewalk Toronto project team has already secured $90 million at the planning phase. Aggarwala added Quayside could become a model city for others to employ the newest technologies in the urban design.

But the proposal is witnessing a flake of criticism during a series of public discussion sessions. Torontonians are skeptical about how the Google’s sister company will utilize the collected data. Sidewalk Labs has not disclosed any framework for using the information and hence there is a lack of transparency at this frontier.

In May this year, Waterfront Toronto informed it had formed a small panel of advisors to give a contribution on “data privacy, digital systems, and the safe and ethical use of new technologies in the next phase of Waterfront revitalization.”