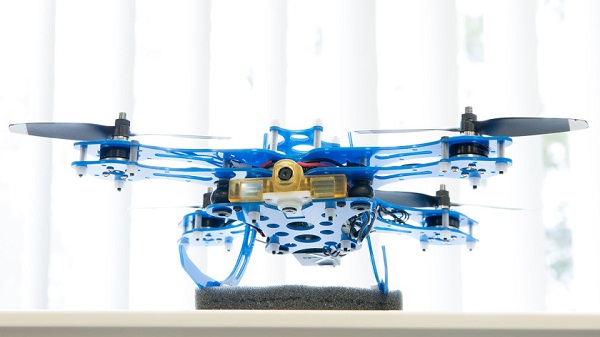 The Qualcomm Snapdragon Flight platform will be targeted at high-end commercial and consumer drones as well as other robotic applications.

In a press release, the tech company announced its entry into the drone industry with its subsidiary, Qualcomm Technologies, hosting Qualcomm Snapdragon Flight.

The Qualcomm Snapdragon Flight is a single development board measuring 58x40mm and is based on a SoC (system-on-chip) made especially for the flying robots. Qualcomm will be providing hardware and software designed for high-end drones.

The platform supports 4K and 720p video recording and encoding with stabilisation, image enhancement, inertial measurement, and optic flow for navigation along with GPS navigation with obstacle avoidance, and a digital signal processor for real-time flight control. There is also support for extra sensors such as a barometer.

The small computer board is based on the Snapdragon 801 processor found in many high-end Android phones. It includes a quad-core 2.26GHz CPU, integrated Adreno 330 graphics, a Qualcomm Hexagon DSP, and dedicated image and video processing hardware. A Global Navigation Satellite System receiver, dual-band Wi-Fi n, Bluetooth 4.0 will allow for remote control and communications.

Qualcomm’s Quick Charge tech will allow for swift charging between flights, allowing for longer deployments and less turnaround time. The Snapdragon Flight will make its debut in a Chinese Yuneec drone that hits markets in the first half of 2016.

The design potentially decreases the size and weight of a drone’s electronics, allowing for more flexible, less expensive designs, as well as longer flight times.

Drones today are made from several component vendors offering separate solutions for aerial photography, data gathering, crop dusting, navigation and communications, adding to the cost and bulk of consumer drones, Raj Talluri, senior vice president of product management for Qualcomm Technologies, said in a press statement. The Qualcomm Snapdragon Flight brings together the technologies onto a single board, allowing OEMs to develop drones that are lighter, smaller, easy to use and affordable with long battery life and sophisticated functionalities.

The drones are now considered as a stimulus to boost the economy. The Qualcomm Snapdragon Flight platform will be targeted at high-end commercial and consumer drones as well as other robotic applications. It can also be implemented as a reference design or customised further by developers.

If Qualcomm’s new SoC meets market expectations, the semi-conductor company could take the lead in the market share of compact, energy-efficient drones with strong image processing and communications capabilities.

Christy Gren
Christy Gren is an Industry Specialist Reporter at Industry Leaders Magazine she enjoys writing about Unicorns, Silicon Valley, Startups, Business Leaders and Innovators. Her articles provide an insight about the Power Players in the field of Technology, Auto, Manufacturing, and F&B.
« 9 Most Powerful & Iconic Female Entrepreneurs Who have Changed the World
Five Most Young, Influential, and Powerful CEO in the Business Niche »
Leave a Comment
Close