Publicis and Omnicom heading to be the biggest merged ad firm 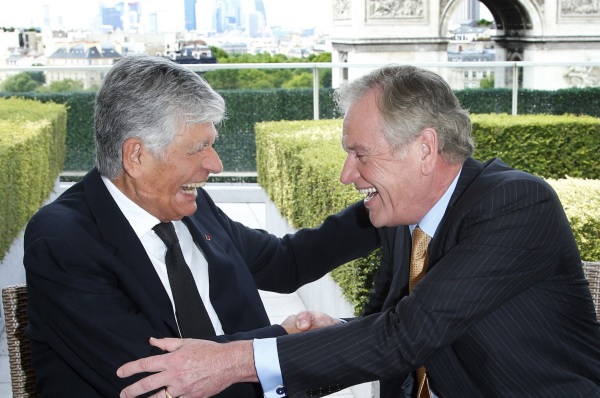 In a surprise move Publicis Groupe SA (PUB) and Omnicom Group Inc. (OMC) agreed to merge to create the world’s largest advertising company, in the biggest deal ever in the industry.

Omnicom CEO John Wren and Publicis Groupe Chairman and CEO Maurice Lévy, will be co-CEOs as they unveiled the agreement at a press conference in Paris yesterday. They announced the “merger of equals,” to be called Publicis Omnicom Group . The holding companies had combined revenue of roughly $23 billion in 2012. By the first quarter of 2014, it will have a $35 billion market cap combined. The combined entity will trade on NYSE and Euronext Paris under symbol OMC.

The holding company will be based in the Netherlands and will maintain headquarters in New York and Paris. Stockholders of Paris-based Publicis and New York-based Omnicom will each hold about 50 percent of the new entity. The merged group will have more than 130,000 employees globally and will be larger than WPP.

The coalition will bring under one roof agencies including Omnicom’s BBDO Worldwide and Publicis’s Leo Burnett and Saatchi & Saatchi, widening their presence in every major market. As the global advertising industry has started to show signs of a recovery,the alliance will also give the owners more authority to negotiate for their clients better ad rates for media placements on television, the Internet and in print.

After the deal’s completed, Omnicom Chairman Bruce Crawford will be chairman of Publicis Omnicom for the first year. He will be succeeded by Publicis’s Elisabeth Badinter in the second year. After an integration and development period of 30 months, Levy will become non-executive chairman and Wren will become CEO.

“We’ll be able to do things better, faster, get closer to things that are relevant in a very changing environment and we won’t be as challenged as we would have been in a traditional sense,” Wren said.

“Changing consumer behavior, new talent to emerge, big data explosion, access to new tools—this leads to a powerful new solution for our clients,” Levy said. “Our mission together is to create that new center.”

The merger has drawn intense scrutiny by antitrust experts and may even be blocked by U.S. regulators.

The transaction, the culmination of years of consolidation in the global advertising market, will probably spark opposition from corporate customers concerned with the power the merged firm may wield in the advertising market, said Bert Foer, president of the American Antitrust Institute, which advocates strong enforcement of antitrust laws.

The merged firm is going to be able to influence strategy for an entire industry,” Foer said in a telephone interview. “They will have a unique ability to tell clients, ‘Here’s what you need to do,’ and an enhanced ability to coordinate strategies such as when to introduce new products, how to price them and how to market them.”

The chief executives of Publicis and Omnicom said they had spoken to major clients about their planned merger and did not anticipate major problems with big advertisers defecting to rivals in the transition period.

Publicis CEO Maurice Levy said the reaction to the merger from all the company’s major clients had been “extremely positive”.

Analysts and Competing sector executives expect that the Publicis Omnicom coalition could incite some of their big customers to switch agencies in order to avoid conflicts. Omnicom and Publicis own networks of agencies and PR firms within the larger group. They’re designed to work independently so that competing clients are placed in separate networks to avoid conflict.

According to data compiled by Advertising Age,if the Publicis-Omnicom union proceeds as planned, the new group will overtake market leader WPP ,and also have a combined market capitalization of $35.1 billion, market value and about 41 percent of total spending by the top 10 media agencies in the world.

So far, stock investors have in general reacted positively to the deal. Publicis jumped as much as 6.6 percent and traded 6.2 percent higher at 63.05 euros  in Paris, valuing the company at 13.3 billion euros ($17.6 billion). Omnicom added 7.3 percent to $69.84 in New York for a market value of $18 billion. Before today, the stocks have each gained about 30 percent this year.