Porsche v/s Mercedes: Racing to be “THE” Hybrid Supercar? 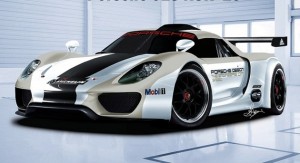 Hybrid, Electric and Fuel Cell Technology have been the buzz words at this week’s Detroit Auto Show, with car-makers unleashing a mind-boggling number of electric models and hybrids here on Monday in efforts to gain an edge in the emerging trend away from the internal combustion engine.

The stars so far? Porsche’s 918 RSR Hybrid and Mercedes-Benz SLS E-Cell Electric! Let’s look at what the two have to offer…

The 918 RSR racecar is a modified version of the Spyder hybrid introduced with much gung-ho at this week’s Detroit Auto Show, further fuelling the excitement and anticipation of environment-savvy Porsche lovers who were left salivating last spring when the company announced plans of building a production version of the 918 plug-in hybrid Spyder supercar.

Described as “Pure Performance” by Michael Mauer, Porsche’s head of design in a statement, the 918 RSR features a V-8 engine, an ultra-impressive 767 horsepower, and a 36,000 rpm electric flywheel power generator that gathers kinetic energy from the vehicle’s wheels and converts it to electricity. Once sufficient electricity is gathered, drivers can press a button to release it for acceleration.

While the 918 Spyder is focused on both performance and fuel economy, the RSR comes across as the coupe version of the Spyder. The vehicle is fuel efficient in the sense that racecar drivers have to make fewer pitstops than they might with less efficient vehicles, but chances are that everyday drivers won’t spring for the RSR – it will cost somewhere in the range of $600,000.

Vehicles like the 918 RSR demonstrate that hybrids can still look like high-performance supercars, Mauer says. Automakers simply have to swap out combustion engines for hybrid engines, but the vehicles can still look the same. 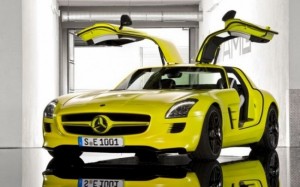 What then, does Mercedes E-cell have to offer? “The E-cell promises that electric doesn’t have to be boring,” says Steve Cannon, VP of Marketing for MB-USA. Compared to other automakers at the Detroit Auto Show, including Porsche, Mercedes-Benz isn’t putting all of its sustainable eggs in the hybrid and electric basket. Instead, the automaker is pumping research and development dollars into diesel, hybrid, electric, and fuel cell technology, with 10 billon euros spent on alternative fuel train technology in the past year.

“It’s easy to parade out concept cars,” says Cannon, in an obvious reference to the slew of automakers who are showing off hybrid and electric concept cars at the auto show. But, he says, the E-cell and F-cell are real vehicles that customers can buy in the near future.

The E-cell, which will go on sale in 2013, boasts 526 horsepower, 649 lb-ft of torque, four compact electric motors that each deliver 12,000 rpm and a 480 kW lithium-ion battery pack. The vehicle goes from zero to 60 mph in four seconds. It will probably cost somewhere around $183,000, the price of the regular SLS AMG supercar.

The last word on Hybrid Supercars

While Porsche’s head of Design, Mauer refused to divulge in the future of hybrid supercars as envisaged by Porsche, he’s excited about the possibilities of tinier hybrid engines. “As long as the space required for a hybrid engine is the same [as with a combustion engine], the proportions of the car won’t change,” he says. “Once it requires less space, we can think about a completely different layout.”

As for Steve Cannon’s take on fuel cell technology, he admits that there are a lot of things that need to happen before people embrace fuel cell vehicles – primarily, educational marketing initiatives like the around-the-world drive (not to mention the buildout of a hydrogen fueling infrastructure). In the short term, Mercedes-Benz is betting on hybrids to lead the pack – but the company wants to be ready when customers are ready to embrace new technology.