Pocket Printer: a tiny robotic printer that lets you print on the go

Despite our smartphones offering us a plethora of features, one thing people can’t normally do on the go: printing. Well all those problems could be solved soon, thanks to a Kickstarter campaign called the Pocket Printer. 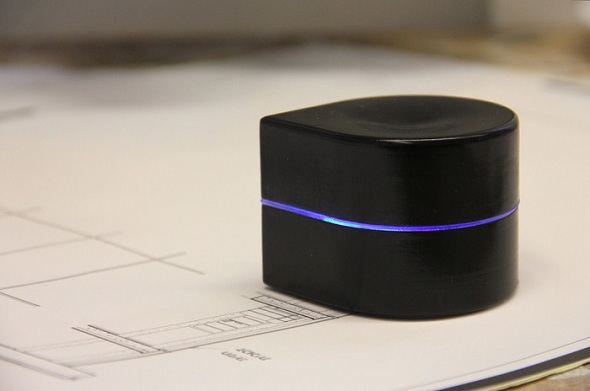 Zuta Labs has been working on the Pocket Printer for more than a year. At the moment, the company is offering the first 1,000 early birds a Pocket Printer in Mars Black for $180.

Israel-based Zuta Labs has been developing a super small printer that sits on top of the paper and prints by creeping across a sheet of paper using inkjet technology to create words and pictures. The company already has developed a working prototype, the Zuta Pocket Printer, and is currently seeking to raise $400,000  via a just-launched Kickstarter project to make it available to consumers.

The Pocket Printer, fundamentally is a tiny robot that measures 10 x 10 x 8 cm that can roll around on a page and print documents. As its name implies, this is a printer that is tiny enough to fit into the pocket, which means users can easily take it with them wherever they go and get their stuff printed on the go.

It’s built on top of a wheeled robotic platform that features a set of omnidirectional wheel system that will allow it to move across surfaces, like paper and with an inkjet printer head, it will help in printing documents without requiring the entire printer setup, no matter how big the page is or what device its being printing from.

Currently, the Pocket Printer can sync with computers using the BPP protocol, which means Bluetooth-enabled computers can automatically recognize it as a printer and be able to use it.  The team is also working on an Android and iOS app, which will enable users to print documents directly from their phone.

The pocket printer will hold a cartridge of ink that will roughly produce 1,000 pages before needing to be replaced. It comes with an internal lithium polymer battery that charges through a Micro-USB cable and powers the device for up to an hour on a full charge.  It works on normal size paper as well, taking nearly 40 seconds to print a complete 8.5″ x 11″ page.

Apart from that the pocket printer comes with certain limitations too. It has been estimated that the

Printer can only print 1.2 pages a minute which is very slow in comparison to the 10 or more pages per minute in a desktop inkjet printer. It also has an unimpressive resolution of 96 x 192 dpi which means there are a number of better resolution printers available in the market.

Zuta Labs has been working on the Pocket Printer for more than a year. At the moment, the company is offering the first 1,000 early birds a Pocket Printer in Mars Black for $180. After that, the prices goes up to $200 and after those are sold; a Titanium White printer will be available for $220. Users can also avail a special Kickstarter edition of the device for $300. So far the folks behind the Pocket Printer have managed to raise $26,000 of their $400,000 goal.