Pizza Hut is collaborating with Chaotic Moons Studio to work on a device that will change the face of food industry forever. Much the same as playing with a tablet or smartphone, the interactive tabletop lets customers build their own pizza by checking what garnishes they might fancy, and pay for it using a smartphone. 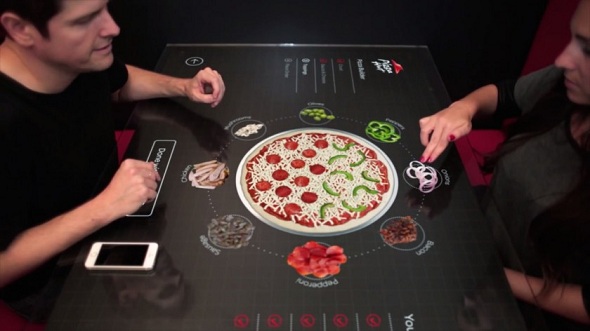 The Interactive Tabletop gives several options such as swiping to change the size of the dough, choosing the sauce, adding toppings.

The interactive tabletop hasn’t been named yet but pizza hut warmheartedly tags it as ‘the concept car of pizza ordering’. This isn’t Pizza Hut’s first endeavor at integrating food and technology. In 2012, Pizza Hut started letting Xbox 360 users order pizza through their consoles, just so game-lovers don’t have to take the pain of getting off their couches until it’s time to answer the door. Clearly the pizza chain wants to stay ahead of the game by winning hearts of as many communities (game lovers, technology lovers and now introverts who hate human interaction while ordering food…) as it can.

In the concept video produced by Chaotic Moons Studio, it shows visual representation of how the tabletop experience is like.  The idea has been inspired from the initial concept of Microsoft Surface (much before it became a tablet) which is pretty evident from the multi-touch gestures and plethora of interactive UI elements.  It gives several options such as swiping to change the size of the dough, choosing the sauce, adding toppings. If only we could bring the touch screen technology home!

Pushing out the innovation on a more extensive scale and might be a little troublesome if taken from a business point of view such as taking care of expenses, logistics and lastly cleanliness.

The interactive tabletop could materialize in any of Pizza Hut’s 4,000 outlets. Recently a large number of food chains have taken to integrating technology in the ordering process. With the Pizza Hut app on Xbox 360, the pizza chain earned $1 million within four months. Last year, Domino’s Pizza revenue shot up by 6.9 percent in the third quarter to $404 Million, while its net income jumped by 18% to $30.6 Million. Investments in digital and mobile played a pivotal role in its success.