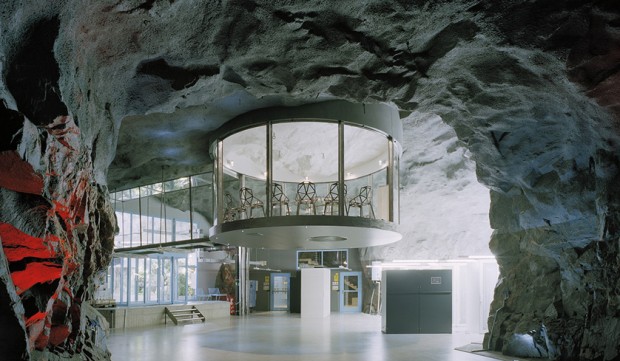 This is the high security data centre where mysterious WikiLeaks founder, Julian Assange, has chosen to store his millions of controversial data files.

It is interesting enough that this is where the millions of WikiLeaks documents that shook the world are housed. And when you add to this the fact that this futuristic-looking data centre is a former Cold War nuclear bunker, it’s as if Assange has recreated a scene from a high-technology thriller movie.

A former Cold War bunker, in disuse for many years, Pionen was reopened in 2008 and is now the refurbished high-security headquarters of Bahnhof, Sweden’s oldest and one of the country’s largest independent national Internet providers.

What does Pionen offer as opposed to other high-security data centers?

Well, for starters, Pionen, drilled into granite under the Vita Berg Park in Stockholm, is an 8,000-server facility, could theoretically withstand a nuclear impact, and is protected by 24-hour video surveillance and a 2-foot-thick armored door.

The brainchild of leading Swedish architects Albert France-Lanord (AF-L), known for their “permanent need to experiment”, the futuristic cave that is Pionen is fully furnished in 007 style, with suspended glass corridors, a ‘floating’ conference room, designer furniture and lunar landscape flooring, not to mention two German V12 diesel submarine engines on standby for backup power.

Founded by Oscar Swartz in 1994, Swedish Internet Service Provider Bahnhof, was the first independent ISP in Sweden, and is currently represented in Stockholm, Göteborg, Uppsala, Borlänge, and Lund.

After having raised the bar significantly for constructing a “super-high-security data centre”, the entrepreneurs behind Bahnhof are taking data storage centre design to the next level, with their new venture called MDC (Modular Data Centres) Stockholm.

Given the manner in which the technology age is progressing currently, MDC envisages that “Future information centers can be entire cities of steel, based on single units docked to each other – module by module – growing forever.”

Jon Karlung, Chairman of Bahnhof and CEO of Modular Data Centers Stockholm elaborates on the new project saying that, “One problem with data centers are that they require heavy investments in capital and human resources. Launch-time may be two years after initiation. And when you are done you are done. It is often impossible to expand an existing server hall.”

“When Bahnhof needed more capacity we wished to add this in a modular form to ensure sustained growth capabilities in a flexible and cost-efficient way. We developed and refined containerized data center solutions, using cutting edge Swedish technology and vision. Since this is not Bahnhof’s core business as an ISP we decided to place business risk outside the firm but with Bahnhof as a strategic partner,” he adds.