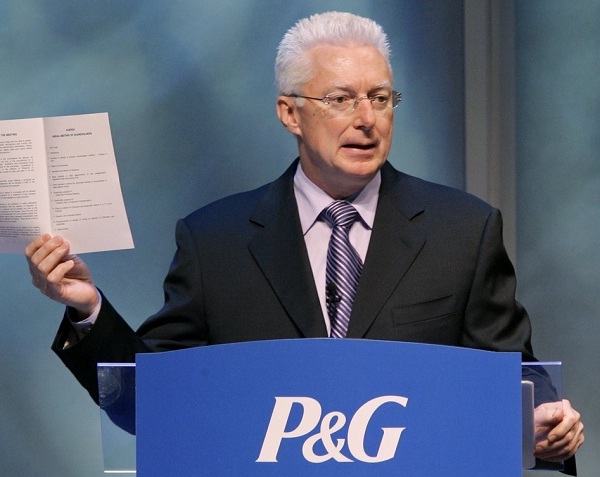 With problems on board, Procter & Gamble Co. decided to replace CEO Bob McDonald with well-known A.G. Lafley as the company aims to get out of the woods. Certainly, the news on the sudden replacement satisfied investors, including William Ackman, who had been pushing the P&B to change the steersman. A.G Lafley will have a tough task as he will face a restructuring process at P&G Co., but investors repose hope in his ability to work wonders.

Iconic Procter & Gamble Co. informed that it decided to replace its CEO bob McDonald with A.G. Lafley who, nota bene, had served as chief executive officer at P&G between 2000 and 2009. The replacement of P&G CEO Bob McDonald was widely expected, yet the decision was indeed abrupt. However, this abruptness seems to be natural, taking into account that the company has been trying to improve its performance in the face of the harsh competition and adverse market conditions.

Interestingly, the change at the top has been introduced immediately. This is what the investors had been waiting for. On the other hand, Bob McDonald is to say farewell to P&G Co. on the 30th of June after the 33-year-long faithful service at the company.  Jim McNerney, board director, explained the decision to nominate Lesley, underlining in a statement: “A.G.’s track record and his depth of experience at P&G make him uniquely qualified to lead the Company forward at this important time.”

The fact is that Procter & Gamble Co. had been experiencing mounting pressure from investors since July 2012. Even though the company started to implement its $10 billion restructuring back  in February 2012, the pressure did not change.  Interestingly, William Ackman, who bought a 1 percent stake in July 2012, was the main originator of the mounting criticism. He urged company to boost manufacturing output and downsize.  Without a doubt, the departure of Bob McDonald is partially his merit.

Moreover, investors are probably much satisfied with the choice as A.G. Lafley is known for his determination. Indeed, during his service he was a strong adherent of progress, thus he introduced innovative changes at P&G Co. Thanks to his decision and determination, Procter & Gamble Co. got more involved in emerging markets in Asia and Latin America.  Therefore it seems that he is the right person in the right place as the company is facing more and more burning problems.

Even though the ship had not sunk yet, the fact is that Procter & Gamble Co. has been struggling. Cost reductions and innovation have not satisfied investors who witness anemic revenue growth. But investors have to wait to see the restructuring plan bearing fruits.

New P&G CEO A.G. Lafley will have to face not too optimistic situation in emerging markets, harsh conditions in the crisis-hit European Union. and many more problems…

Anna Domanska
Anna Domanska is an Industry Leaders Magazine author possessing wide-range of knowledge for Business News. She is an avid reader and writer of Business and CEO Magazines and a rigorous follower of Business Leaders.
« Samsung best in consumer devices say Consumers at CTIA show
USITC says Xbox does not infringe Google’s design »
Leave a Comment
Close