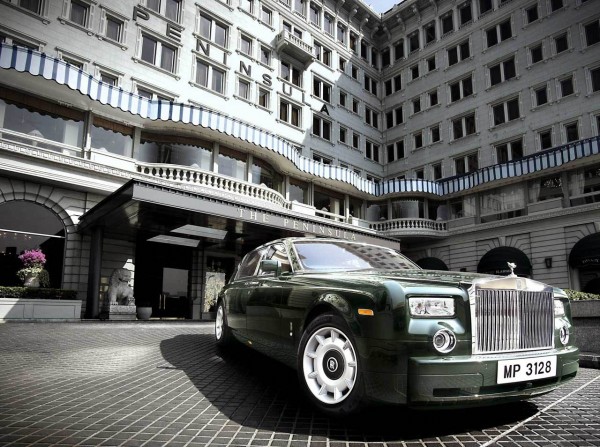 The Peninsula Hotels group has a unique identity among the world’s leading luxury hotels.  Peninsula Hotels was established in 1928, and now operates prestigious luxurious properties in nine major cities. These include the flagship in Hong Kong plus Shanghai, Tokyo, Beijing, New York, Chicago, Beverly Hills, Bangkok and Manila, with Paris opening in 2013. Peninsula is a living legend, the name synonymous with luxurious comfort and impeccable service.

Peninsula has a high vision, and its standards always aiming to delight its customers. It kind of seems remarkable; Peninsula is now serving the third generations of many of its loyal guests.

The history of Peninsula, that became the Hong Kong and Shanghai Hotels, stretches back almost as far as Hong Kong itself. It was founded by members of the Kadoorie family and was built with the idea that it would be “the finest hotel east of Suez.”

In 1994, the hotel was expanded with a 30-story tower that follows the same style as the existing building. The facade of the existing hotel building was preserved, including the forecourt, the lobby and the front facade. The hotel remained in operation while construction commenced.

The new tower also includes a helipad for clients. It is one of only two private rooftop helipads in the territory. The Peninsula Hotel has a collection of restaurants. They include the gourmet French restaurant Gaddi’s, which has one of the first Chef’s Tables in Hong Kong, and the Philippe Starck-designed Felix. Other notable restaurants include Spring Moon, Imasa, and Chesa, which specialize in Cantonese, Japanese, and Swiss cuisine respectively.

The Lobby of the Peninsula serves traditional English-style Afternoon Tea, reminiscent of Hong Kong’s colonial era. Since December 2006, the hotel has had a fleet of 14 Long Wheelbase Rolls-Royce Phantoms painted in the hotel’s signature green. This was the largest order placed for Rolls-Royce in the history of the company. It replaces a fleet of Rolls-Royce Silver Spurs.

The Peninsula Spa by ESPA features private treatment rooms where guests can enjoy a relaxing massage. Sightseeing tours can be done using the hotel’s helicopter or luxury cars like Rolls-Royce and Mini Coopers.

Felix rooftop restaurant features modern European cuisine while English afternoon tea is offered at The Lobby. Other options include French, Chinese, Swiss and Japanese dining. Salon de Ning lounge and The Bar offers a range of cocktails and drinks.

Ms. Rainy Chan, the General Manager of The Peninsula Hong Kong said, “Our strategic location, close to key business, shopping and entertainment areas, makes it ideal for a business executive, whether travelling alone or with a spouse. The many room features and amenities ensure you can work effortlessly and seamlessly, the other facilities like restaurants and bars provide you with the convenience of entertaining for any location.”

The Peninsula Hotel Hong Kong has been recognized as an internationally leading hotel in many areas. It has received awards from a food and beverage magazine, Travel + Leisure, and other industry organizations.

The hotel is mentioned in Paul House’s novel Harbour, and the James Bond film The Man with the Golden Gun starring Roger Moore, where the hotel’s fleet of Rolls-Royce Silver Shadows is mentioned.

The hotel was prominently displayed in the 1988 NBC television miniseries Noble House.

In 2007, The Peninsula was used for a scene in the superhero film The Dark Knight, involving actors Morgan Freeman and Chin Han, who played Lucius Fox and Lau, respectively. The hotel was chosen, as it was one of the only two private helipads in the SAR and the producers preferred the roof of The Peninsula over that of Shun Tak Centre.