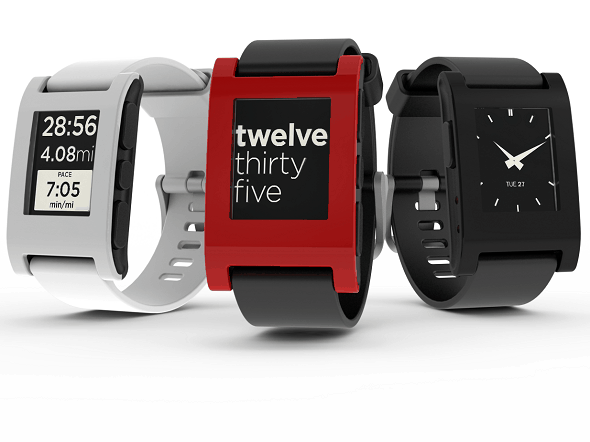 The Pebble Time can last up to seven days on a single charge in comparison to other smartwatches.

Pebble, the Palo Alto-based startup has launched Pebble Time, its third-generation smartwatch with an all new design and a color e-paper display ready to take on the Apple Watch.

Incidentally, the new smartwatch was teased this week by a countdown clock that expired Tuesday on Pebble’s website. Unlike its two previous models, which had black and white E-ink displays, the new model keeps the low power e-ink screen but adds colour to the display. It also features a microphone and a new design that is 20 percent slimmer than Pebble predecessors.

The new interface shows a long (vertically) scrollable timeline with all that’s relevant to the user like calendar appointments, reminders, and sports scores in a simplified manner. The Pebble Time can last up to seven days on a single charge in comparison to other smartwatches.

Pebble won’t be available in stores right away. It will be sold through Kickstarter in an attempt to raise more money for the company and sell the initial batch of units. The firm set a $500,000 target and broke through it within 17 minutes. And after seven hours after the campaign kicked off, Pebble had raised over £6.1m from close to 30,000 backers, obliterating the previous record for the milestone. The campaign still has 31 days to go.

Pebble’s CEO Eric Migicovsky said that with the Apple Watch being launched in April, Pebble wants to use Kickstarter campaign to raise awareness among consumers that there are other options available in the market.

“It’s not that big of an assumption to say Apple is putting a lot of effort into the space,” Migicovsky said. “One of the reasons why is people who backed us on Kickstarter demonstrated there’s a market for it. We still need people’s support. We’re a small company battling the largest company in the world. One of the ways we think we can do that is taking the fight to the users that actually matter. If you support us, we’ll continue.”

Kickstarter backers can avail Pebble Time for $159 (£103) in three different colours and will be shipped from May. Once the Kickstarter campaign is over, it will be sold in retail stores around the world for $199 (£129). Those prices are about $50 less than the average Android Wear smartwatch and $150 less than the base Apple Watch.

The new Pebble has interchangeable rubber band allowing users to add new bands to the watch, giving it a more casual feel. The display is covered in durable Gorilla Glass, with a stainless steel bezel. It will work with both Android and iPhones, as with older variants.

Anna Domanska
Anna Domanska is an Industry Leaders Magazine author possessing wide-range of knowledge for Business News. She is an avid reader and writer of Business and CEO Magazines and a rigorous follower of Business Leaders.
« Apple to invest €1.7 billion in two green data centers in Europe
Google’s Offers ‘infinity million’ dollars to find bugs in Chrome »
Leave a Comment
Close