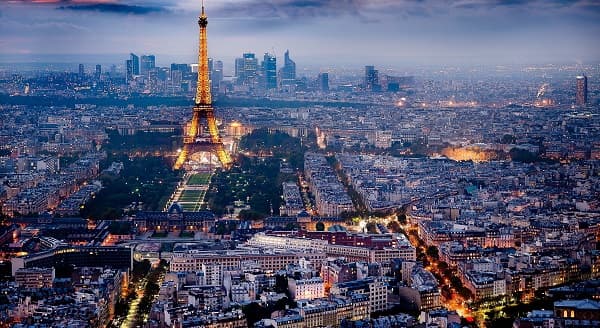 Paris… Can Paris be described in few words, one sentence, two sentences? The answer is no. Paris, the City of Light, has this undeniable magic that lures ordinary mortals. But the truth is that Paris is not only the city of love. Indeed, Paris is believed to be the better business destination. The City of Light is simply believed to be a place to do business.

Even though France and the whole European Union have been losing their significance in the global perspective, still Paris and other European capitals and cities are believed to be attractive to business. Paris is arguably the better business destination. And while some may argue what is better London or Paris, the answer is not always simple. However, the truth is that usually London tops the City of Light in many rankings. But the fact is that London and Paris have been countlessly named places to do business and the Europe’s most business friendly destinations.

Truth to be told, Paris always is ranked high due to its availability of qualified staff, access to markets, excellent communications and transportation. All these and more make Paris the better business destination and a place to do business. Therefore it is not surprising that many companies plan to open office in the City of Light. Audrey Hepburn was right when she said: “Paris is always good idea.” And indeed, companies just want to be in Paris as they expect that being in Paris is something inevitable.

Back in 2008, Elaine Rossall, head of business space research and consultancy at Cushman & Wakefield, underlined one thing that is still actual: “London, Paris and Frankfurt form a top tier of business cities which are unlikely to be seriously challenged in the near future. The rise of regional cities has been driven by advances in telecommunications and more sophisticated government promotional strategies aimed at attracting inward investment. It is amongst the lower rankings where these smaller regional cities are really jostling for the attention of major corporates. They are benefiting from a more cost-conscious business climate where flexibility of location and an appreciation of ‘softer’ factors such as quality of life are becoming increasingly important.”

Business in Paris? Pourquoi pas? (Why not?)

So why is Paris the better business destination? Why have so many companies decided to do business in the City of Light? And why are so many more companies interested in entering and doing business in Paris?

The simple answer for the aforementioned questions is that Paris is the center of the French economy, not to mention that it accounts for approximately 20 percent of the national GDP. What is more, Paris is simply one of the wealthiest cities in Europe just after London!

Without a doubt, companies are so much attracted to Paris as it has over 2 million people, not to mention 11 million inhabitants who live in the surroundings. So, the large population simply gives companies countless opportunities and chances to develop. And what is more, Paris Île-de-France may glory in the title of a global center of decision-making as it has registered offices of the 500 largest companies.

Not surprisingly, Paris is the top place to do business as it has the most essential factors for locating a business, according to the survey conducted by Cushman & Wakefield. The findings of the report show that “easy access to markets, customers or clients’ is still perceived to be the most important factor, with 60% of respondents stating it was absolutely essential.” Among the most important factors are: human capital, quality of telecommunications, transport connection with other destinations.

And Paris has it all… Paris and its area substantially benefit from two major international airports. But do not forget about its high-speed TGV passenger trains connect Paris with hundreds of destinations throughout France and Europe.

To crown it all, companies have a wide range of highly qualified employees as in the City of Light as many as 17 universities are located, not to mention 350 higher education establishments! With its research & development, qualified staff and high level of specialization in a number of sectors, Paris is a really attractive better business destination. To be more precise, just let me cite few numbers.

In the City of Light, the service sector, which is simply a dominating one, employs fourth-fifth of the local work labor. It is not a red herring to point out that Paris is indeed a major tourist and international conference center as it lures approximately twenty-eight million visitors per year.

But that is not the lasts of surprises! The Ile de France area is also known as the country’s premier industrial area with large numbers of SMEs working in electronic manufacturing, automotive and chemical industries, etc.

Are you tempted by Paris? Not yet? So maybe one small piece of information will bring you round to the City of Light. Namely, office occupancy costs in Paris are significantly lower than in London which has recently been awarded with title of the most expensive office space, topping Hong Kong.

Despite the ongoing economic crisis in Europe with its so-called European debt crisis, Paris has remained a place to do business and the better business destination. Why? Just have a quick look at the following numbers. With approximately 88 million visitors passing through its two major airports in 2011, as much as 45 percent of them were on the business. The crisis has not weakened the position of the City of Light which may simply illuminate your business.

Do not be mistaken by its rich historic heritage with world-known momentous architectural character as Paris has been constantly renewing itself by numerous improvements. All these steps are aimed at making the City of Light the better business and leisure travel destination.

Frankly, companies have a wide range of choice. If they do not want to go for elegant and traditional location, they just can pick an office in any skyscraper located in key business centers such as La Defense. The thing is that La Defense is simply known for its skyscraper development with a large accumulation of glass towers, not to mention that it is the largest business center in continental Europe.

With its strong ties with mature markets, namely, the United Kingdom and United States and increasing number of visitors from emerging economies, including Brazil, Russia, India and China, Paris offers an unique opportunity for companies wanting to operate in multinational environment which can be very beneficial for businesses.

To crown it all, Paris is, without a doubt, the better business destination. It is arguably one of the best places to do business. Even though Europe is losing its importance, Paris is still regarded as a very important place to be and do business. And indeed, the City of Light can illuminate your business or take it out of darkness. With its number of exhibitions, fairs and tradeshows which bring business visitors together, it really gives numerous opportunities for business in general.

Angela Carter was precise when she said: “Cities have sexes: London is a man, Paris a woman, and New York a well adjusted transsexual.” Indeed, Paris can seduce. So let your business be seduced by the City of Light.

Anna Domanska
Anna Domanska is an Industry Leaders Magazine author possessing wide-range of knowledge for Business News. She is an avid reader and writer of Business and CEO Magazines and a rigorous follower of Business Leaders.
« What is KALQ keyboard?? Let’s ask Dr Per Ola & Dr Antti
BHP gets rid of Pinto Valley for $650m »
Leave a Comment
Close