We all know that at the Paris Air Show, Boeing and Airbus will headbutt as they show off their sales numbers, debut aircrafts and flaunt their flying skills. Now comes an early reveal that we might also see a flying car. Known as AirQuadOne, comes a futuristic, fully-electrical, passenger-carrying vehicle from Neva Aerospace. At this stage, it’s just a concept for personal manned aircraft with visitors to the Paris Air Show (19- 25 June).

This flying car is expected to reach a maximum altitude of 3,000 ft. It will weigh around 530 kg and carry payloads of up to 100 kg. The 150kg battery pack makes for a flight time of 20 to 30 minutes at a top air speed of 80 km/h. Furthermore, it will be licensed under the light aircraft certification within the USA and EU. 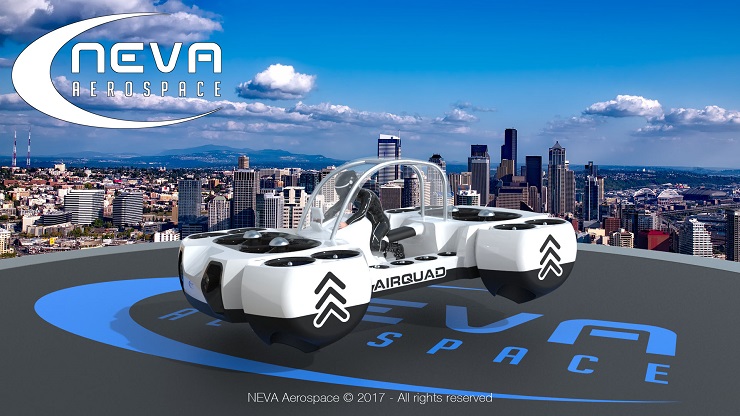 The AirQuadOne flying car is compatible with direct-wire or induction hardware at electric car recharging stations. Neva Aerospace plans to develop both, manned and unmanned versions. They may also develop a semi-electric hybrid model, which would have more flight time of one hour. Moreover, all models will feature a body made out of recycled carbon fiber.

Neva AirQuadOne is the latest in the long string of flying car concepts. Google co-founder Larry Page is backing Kitty Hawk Flyer, an all-electric aircraft. Airbus recently unveiled its secret flying car project Vahana. Uber plans to launch flying cars in Dubai in the next three years. Germany’s Lilium is developing a five-passenger aircraft with a top speed of 144 km/h.

A major roadblock would be getting the green signal from American and European regulators. This could probably take another decade before we move on from sub-standards models to better aircrafts.

Anna Domanska
Anna Domanska is an Industry Leaders Magazine author possessing wide-range of knowledge for Business News. She is an avid reader and writer of Business and CEO Magazines and a rigorous follower of Business Leaders.
« France to Run Automated Drone Trains by 2023
You Too Can Achieve Work-Life Balance Like Multitaskers »
Leave a Comment
Close