Paint your Home into a Billboard, Get Adzookie to Pay your Mortgage 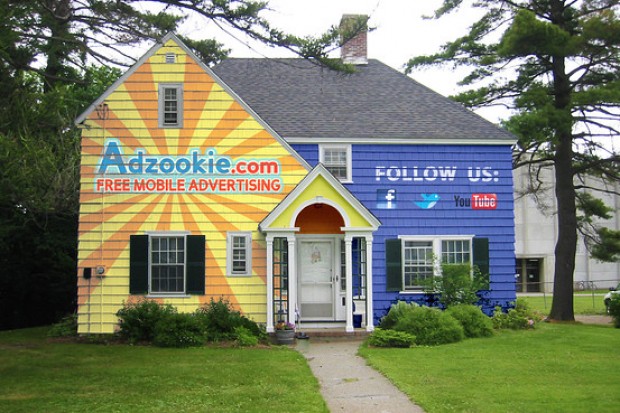 Paint your Home into a Billboard, Adzookie will Pay your Mortgage (image courtesy adzookie)

Own a home without having to pay mortgage, avoid foreclosure AND get a free colourful paint job?

Seems like an unbelievable deal huh? Well, it would also have been super-charitable, if it hadn’t also meant giving up all external surfaces for Adzookie to paste promotions on.

With an extremely tempting promise, that says, “We’re looking for houses to paint. In fact, paint is an understatement. We’re looking for homes to turn into billboards. In exchange, we’ll pay your mortgage every month for as long as your house remains painted” on their website, Adzookie, the mobile advertising giant that has carved a very cool niche for itself with regards to using Smartphones as advertising media, has come up with a novel idea – converting homes into billboards!

Seems so obvious and yet is obviously innovative right? If you can have your car painted into a mobile-billboard to help you with paying it off, why not your home?

Adzookie wants to paint its logo and social media icons onto participating homes. In return, the company promises to pay monthly mortgages for those who jump on to their mobile-billboard-homes bandwagon, for as long as the property remains painted with Adzookie’s ads.

The offer, open only to house-owners, involves the entire house (with the exception of roof, windows, and awnings), being painted.

Also, these houses would need to be kept painted for atleast three months. While there would be a possibility of extending the agreement for upto a year, if the agreement is cancelled following the initial three months, Adzookie would paint your home back to its original colours.

What’s the catch? Well, the allocated budget for the entire campaign is only $100,000, and Mendoza has allocated about $8,000 only on painting each home, so there’s very little chance that Adzookie would pay your entire mortgage.

Adzookie CEO, Romeo Mendoza, was reportedly overwhelmed and a little bit saddened too – surprisingly – with having recieved about 3,000 applications within 24 hours of announcing their deal. “It’s coming in droves,” he said in a statement. “We hit a nerve… I knew people needed help, but I didn’t know so many. That’s kind of sad. We can’t help everyone, but we can help some.”

Like Mendoza said, they campaign has really “hit a nerve…”

“I think it’s because the idea is so polarizing – you’re either really for it or really against it.” He added.

Some people might find the idea extremely repulsive, given the whole bit about turning your dream castle into a “sellsuming” process, like Mendoza pointed out when the campaign was launched last week, there are some people who can really do with the help. He estimated that about 90% of the applications they received were stories of need.

Mendoza said in a statement that to start with, Adzookie is looking at painting about a hundred homes, and might consider expanding throughout the country once it enlists big-name advertisers.

Brands see the Olympics as an opportunity to connect with their consumers and boost sales with limited edition products.
1 day ago